As user of Airflow for our custom workflows we often use DagRun.conf attributes to control content and flow. Current UI allows (only) to launch via REST API with given parameters or using a JSON structure in the UI to trigger with parameters. This is technically feasible but not user friendly. A user needs to model, check and understand the JSON and enter parameters manually without the option to validate before trigger.

Similar like Jenkins or Github/Azure pipelines we desire an UI option to trigger with a UI and specifying parameters. We'd like to have a similar capability in Airflow.

This AIP was created after working a longer time with an UI plugin which we implemented customized allowing users to "easily" trigger DAGs with parameters. More and more we realize that every use case and demo we make requires an simple entry form to show "how easy" it is (not to scare users and have them running away). We propose to "productize" the feature from a plugin and merge it into the Airflow Core UI - hoping that more people can use this feature, having a lower entry barrier for "new" users and also to close gaps from standard UI path to trigger a DAG today compared to how the UI plugin is integrated.

We also had (in the past) a separate UI (outside of Airflow) just to collect parameters and trigger the Airflow DAG in the backend via REST API - but this was a full separation of the user from Airflow and at the end requires a very redundant UI being developed and maintained.

This (technical) proposal is made based on current Flask AppBuilder (FAB) and existing structures, Changes made for AIP-38 Modern Web Application might influence the final implementation. Feedback welcome.

We propose to leverage the params attribute of the DAG class with some additional optional attributes so that an UI (one form per DAG) can be specified in the DAG itself (optional). As the params attribute is built upon the Params class to define meta-data to serve the purpose of JSON schema validations, this definition already serves 80% of details needed to render a form. See also https://airflow.apache.org/docs/apache-airflow/stable/concepts/params.html.

The following details to model a form can directly be leveraged from existing Params class definition:

Some additional (optional) attributes are proposed to be added to control a form layout:

Nevertheless re-using the existing Params class comes with a set of limitations compared to a separate definition of a user entry form:

With this extension the current behavior is continued and users can specify if a specific UI form is offered for the Trigger DAG option.

The function of the trigger DAG button in DAG overview landing ("Home" / templates/airflow/dags.html) as well as DAG detail pages (grid, graph, ... view / templates/airflow/dag.html) is adjusted so that per DAG the available form(s) can be controlled for better user guidance. Propsal is to add a DAG attribute trigger_ui:

Menu names for (2) and URLs are determined by the UI class members linked to the DAG. The following options are proposed:

DAGs not defining the attribute trigger_ui will have the options "none" and "json" like today plus if the DAG has params defined also a "form" ("form does only make a benefit if params are defined, else there is no base to render an empty (use-less) form)

The resulting JSON would use the parameter keys and values and render the following DagRun.conf and trigger the DAG:

The number of form values, parameter names, parameter types, options, order and descriptions should be configurable in the DAG definition.

Example view how today's solution is made via a UI plugin to integrate into Airflow UI (but is not linked into the standard "Trigger DAG" button): 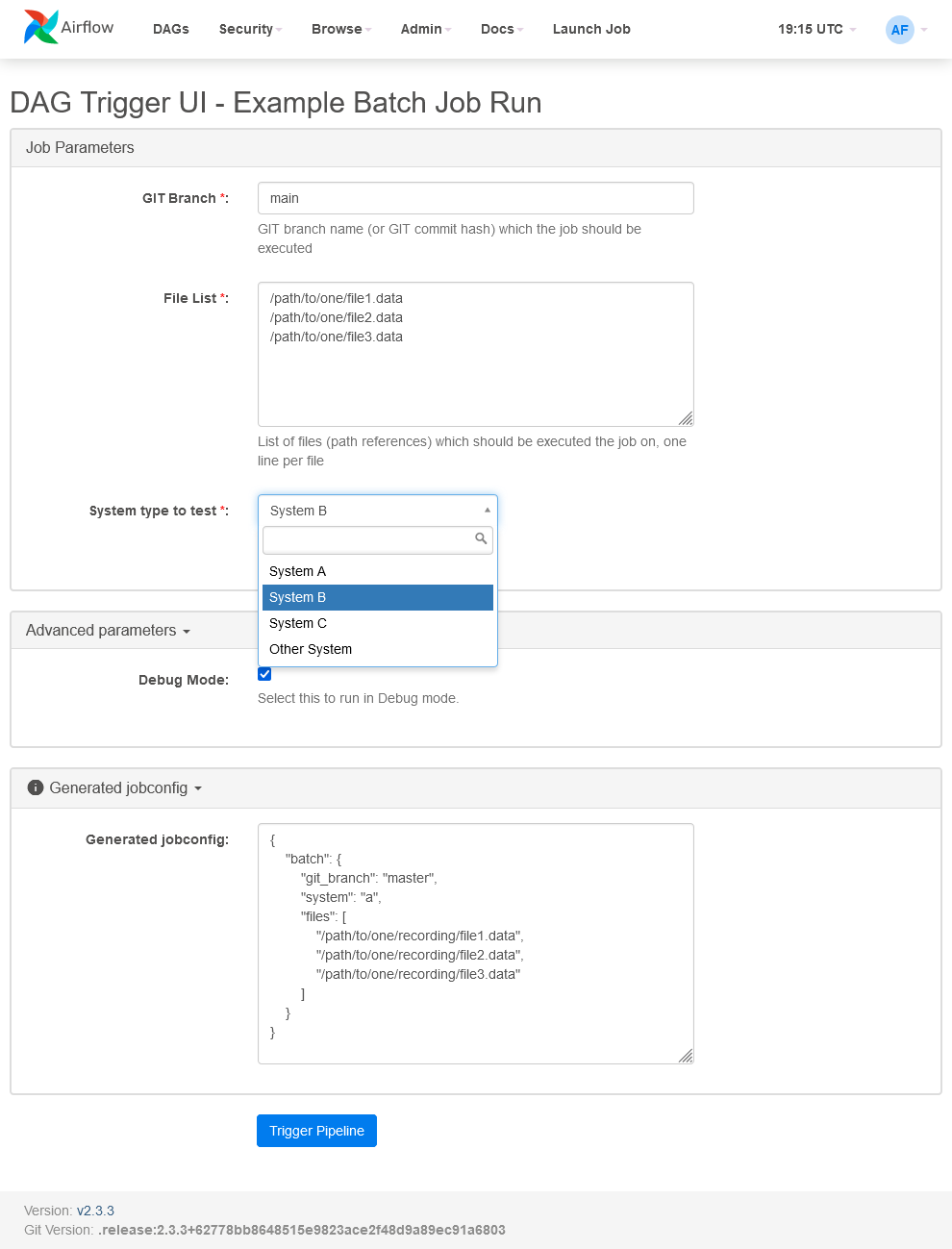 Provide 1-2 example DAGs which show how the trigger forms can be used. Adjust existing examples as needed.

Provide needed documentation to describe the feature and options. This would include an description how to add custom forms above the standards via Airflow Plugins and custom Python code. Proposal is to extend the docs section of "Params" (https://airflow.apache.org/docs/apache-airflow/stable/concepts/params.html) for the purpose of describing how to generate a form from the params definitions.

What problem does it solve?

With this proposal the functional gap is closed allowing to add user friendly trigger UI forms for staring DAGs with parameters (w/o the need that every user must understand the specific required JSON structure to trigger a DAG). Also it adds missing functionality which users know and expect to have from e.g. CI/CD pipelines of Github/Azure DevOps, Jenkins (and many more) that simple forms can be added to trigger with parameters.

Why is it needed?

Are there any downsides to this change?

Which users are affected by the change?

Standard and power users of Airflow are not affected, there is mainly a very positive option possible for rare or entry users allowing to trigger DAG w/o mus experience, lowering the entry complexity.

The initial idea of implementing forms as structured Python classes has been dropped by the feedback received to leverage the existing Params structure. Otherwise of course specific dedicated user entry form modules still can be added later. The proposed approach is a 80/20 proposal (gaining 80% of use cases direct benefit with 20% complexity).

Current workarounds known and used in multiple places are:

Open Questions needed to be discussed and decided before moving ahead?