This page describes the current status of GitHub Actions for Apache Software Foundation projects. This page is maintained by the community.

Summary of the GitHub Actions Status

If you are a Committer/PMC member of an ASF project and thinking about migrating to GitHub Actions, this is the current status:

There are already quite a few projects using GitHub Actions. However, there are unresolved problems with performance of the ASF-wide GitHub Actions Enterprise account, and there are some potential security implications that you might have to be aware of when starting to use GitHub Actions.

There are a few discussions that you can read at builds@apache.org about these issues:

All public projects, resources, images, etc.  on GitHub are generally free (not only Apache Software Foundation ones). No problem with that. You will not incur any costs as long as you do not create any "private" resources, so there is no way you can create billing consequences.
However there is an important caveat: as more projects use GitHub Actions, the more they all compete for a shared job queue (more on performance below). Apache Software Foundation has an "Enterprise" organisation status in GitHub.

Currently "native" GitHub Runner Performance/Scalability is far below the requirements of ASF projects using it (due to the 180 parallel job limit all ASF projects have).

If you are going to use GA you WILL experience severe and unacceptable performance issues, especially if your users and builds are predominantly in the EU/US time zone (this is the case for most of the biggest projects using GitHub Actions).
Apache Airflow (Tobiasz Kędzierski, a contributor to Apache Airflow ) built a very crude dashboard showing the use of GA workflows (it's not jobs but workflows) which clearly shows the extent of the problem. 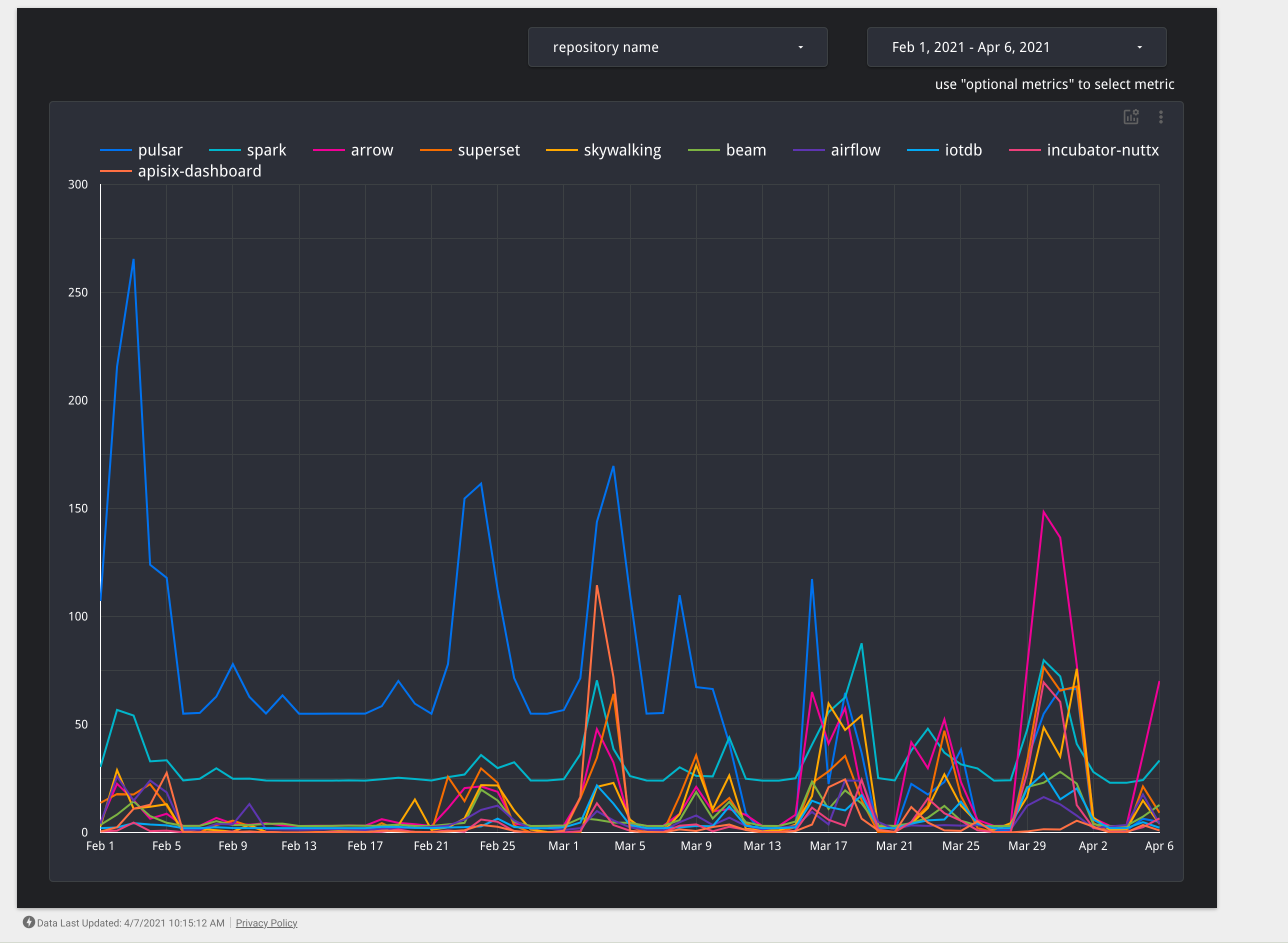 This chart is imperfect - we currently do not have details "per-job" because GitHub is unable to give us the data. We've asked for it at the meeting organised by INFRA on 14 January, 2021, with people from GitHub Actions present, but (at least I am not aware of it) we do not have the data from GitHub available in a usable way (neither as raw data, nor dashboards). The meeting notes and preparation are here (no meeting notes yet available though): ASF Build Infra Meeting 14th of Jan 2021.

The chart is built using the GitHub API and due to API limitations (API call quota) we cannot drill down to the job level. But it's good enough to show the queues and numbers. we are talking about.

Regularly during the EU day/ US morning we have now 500-600 workflows in progress at a time from ASF projects (2 months ago it was 200-300 and then it was pretty OK). We ran our workflows in Apache Airflow for ~ 8 months  without problems, but the last 1.5 months have been really problematic and I'd discourage using GA until those problems are solved.

From that dashboard we've built - the projects that seem to use GA most are: pulsar, spark, incubator-pinot, dubbo-samples, camel-k-runtime, netbeans, beam, airflow, incubator-daffodil, and commons-text.

The reason for the issue

The main reason for the issue is the limit of the job queue ASF (as any organisation) has. The ASF has an agreement (which is great on its own) with GitHub as an "Enterprise Organisation" (for free - this is GitHub's donation to the ASF).

This means that ASF projects have 180 slots in the GitHub Actions Jobs queue allocated and no more than 180 GA jobs can run in parallel. This is far too small for the current demand. It has already caused a number of problems in the past when too many jobs for too many projects have been started at the same time. In January, 2021, during the weekdays in the EU day/US morning, we consistently experienced 5-6 hour queues for the jobs. This basically means that when you submit a PR, you have to wait 5-6 hours before it even STARTS running. This is unbearable and not sustainable.

We've implemented a multitude of optimizations in Airflow and we encouraged and helped other projects (such as Apache Beam, Apache SuperSet, and Apache SkyWalking) to optimize their workflows - including a few custom actions (Cancel Workflow Runs for example).

Unfortunately, there are no tools or mechanisms that could give ASF Infra the possibility of limiting the use of Actions per-project, and until this is solved any approach to limit the use of Actions for each project is destined to fail. Much of the effort we put into optimizing workflows in one of the projects has been very quickly consumed by other projects using more (for example Apache Airflow optimized the use of our workflows and decreased use by roughly 70%). There is also an ongoing effort from other projects to decrease the strain, for example:

To be perfectly clear - this is not a complaint, just a statement of the facts - those projects have no tool or mechanism to limit and monitor the usage of their workflows and there is no mechanism for ASF to enforce any limits per-project.

At the "Build Infra" meeting 14 January, 2021 developer advocates from GitHub mentioned that there might be a way to increase the queue. The ASF - rightfully so - cannot really pay for the increase (this is totally understandable if they have no tools to manage and control it). I am not aware about the results of this yet. Such an increase will only help for a short while, though. This is the same story as with motorways: if you have traffic jams and you widen the roads, it only takes a short time for the traffic to reach the capacity again as people start using the roads more.

One of the solutions that might be sustainable is to deploy self-hosted runners if your project has some infrastructure money (from stakeholders/sponsors) they can spend. We have money in Airflow (from the AWS Open-Source initiative and Astronomer; also Google promised to donate some GCP time). This is, however, (currently) inherently insecure. With the "PR-s from forks" approach of Apache projects, the current model of GitHub Runners is not secure by default. In fact, there is a recommendation from GitHub to NEVER use self-hosted runners for public repositories . Apache Airflow team forked the Runner and we are working on hardening the Self-hosted runners from GitHub,  and we set up auto-scaling runners in our donated infrastructure (PMC member of Airflow  - Ash Berlin-Taylor  is working on it), but this is a big project on its own.

While Airflow has had some early successes and has a POC working, it's already taking a few weeks to secure and test it, even if it is done together with a Devops person to make it robust and secure. Ash Berlin-Taylor shared his early thoughts in the Self-hosted GitHub Runners  document. This is a very rough description of what needs to be done and has a lot of "security" disclaimers and lacks full context (and needs some updates after further learnings).

The solution Apache Airflow introduced is a bit brittle. It is based on what the RUST team has done and it relies on dynamic patching of the runner from GitHub as soon as it is released because they have an aggressive policy of disabling old runners pretty much immediately after a new version is released. Thus it is prone to disruption of service if the patch does not apply cleanly. At the meeting 14 January, 2021 we learned that GitHub is not planning to improve security of the self-hosted runners any time soon (for sure we should not expect anything until mid-2021). So we are on our own for quite a while.

There are a number of security problems you have to be aware of. The 3rd-party actions and 3rd-party dependencies are a huge security risk if not used appropriately (basically if you are using Actions as the examples suggest you are open for easy exploitation by the Action authors). If you do not securely add the Actions you are ripe to any kind of uncontrolled "write" modifications to your repository (!) by 3rd-party Action owners AND (as we've learned recently) by 3rd-party dependencies you install in your build pipeline. One of the problems caused INFRA action to disable the "direct" use of 3rd-party Actions at the organisation level (see the discussion), but there are many more risks that you have to be aware of.

There are two critical security vulnerability reports opened by Jarek Potiuk 30 December 2020 with GitHub Actions - both of them triaged and awaiting for actions on the GitHub side. GitHub Security Lab who in December encouraged users to  post their experiences is engaged as well.  Those issues can be all mitigated (Apache Airflow implemented all mitigation) but they are not what most projects do.

If you decide to use GitHub Actions,  those are recommendations (there are varying opinions on sub-modules use, though):