This page documents Correlation Optimizer. It was originally introduced by HIVE-2206 and based on the idea of YSmart [1]. To turn on this optimizer, you can use ...

In Hadoop environments, an SQL query submitted to Hive will be evaluated in distributed systems. Thus, after generating a query operator tree representing the submitted SQL query, Hive needs to determine what operations can be executed in a task which will be evalauted in a single node. Also, since a MapReduce job can shuffle data data once, Hive also needs to cut the tree to multiple MapReduce jobs. It is important to cut an operator tree to multiple MapReduce in a good way, so the generated plan can evaluate the query efficiently. 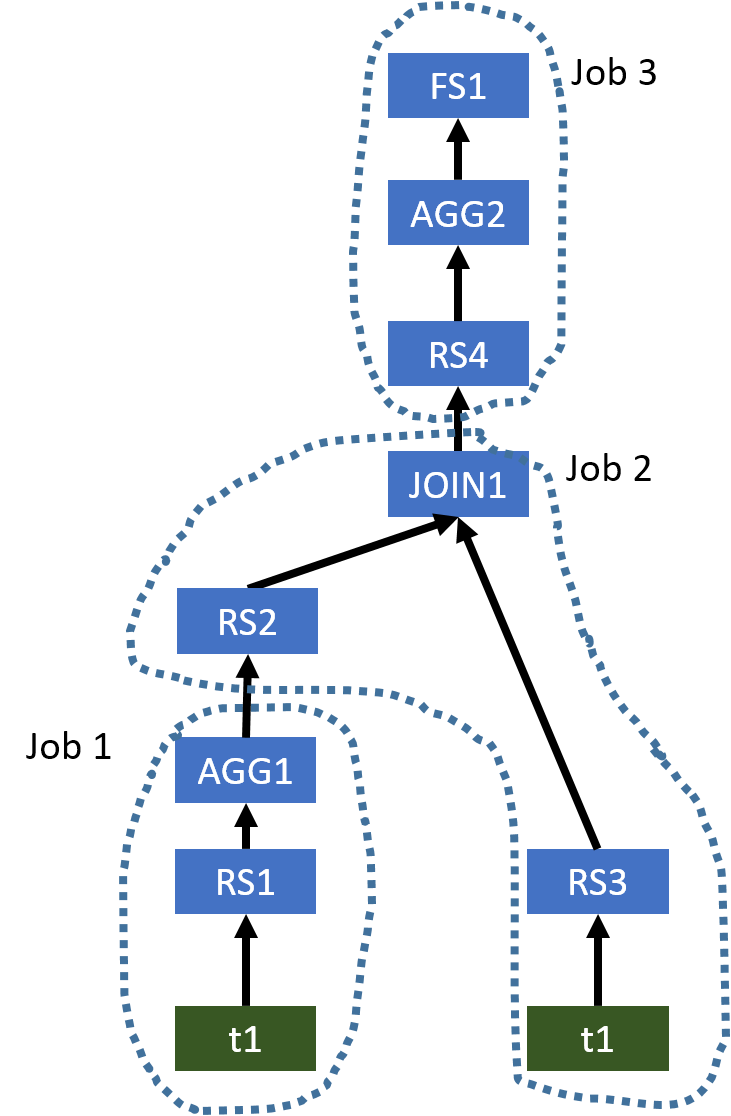 Figure 1: The original operator tree of Example 1 generated by Hive 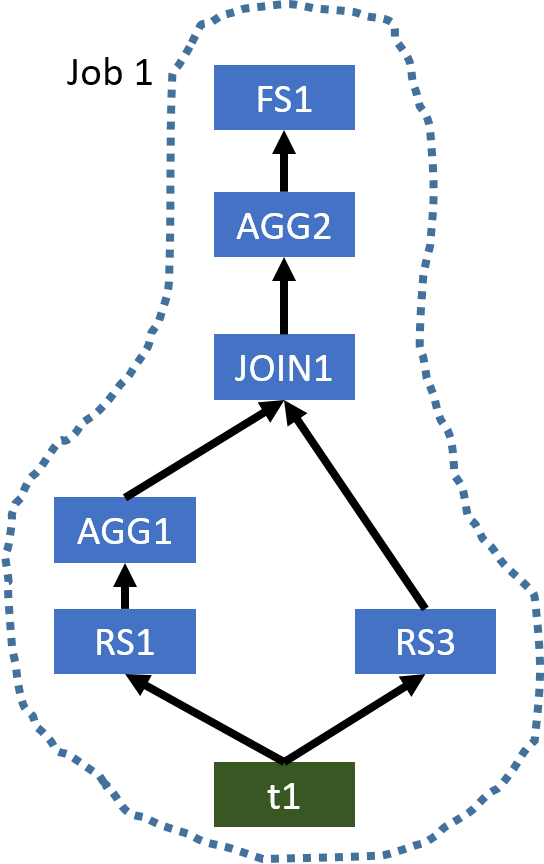 Since the input table of AGG1 and the left table of JOIN1 are both t1, when we use a single MapReduce job to evaluate this query, Hive only needs to scan t1 once. While, in the original plan, t1 is used in two MapReduce jobs, and thus it is scanned twice. 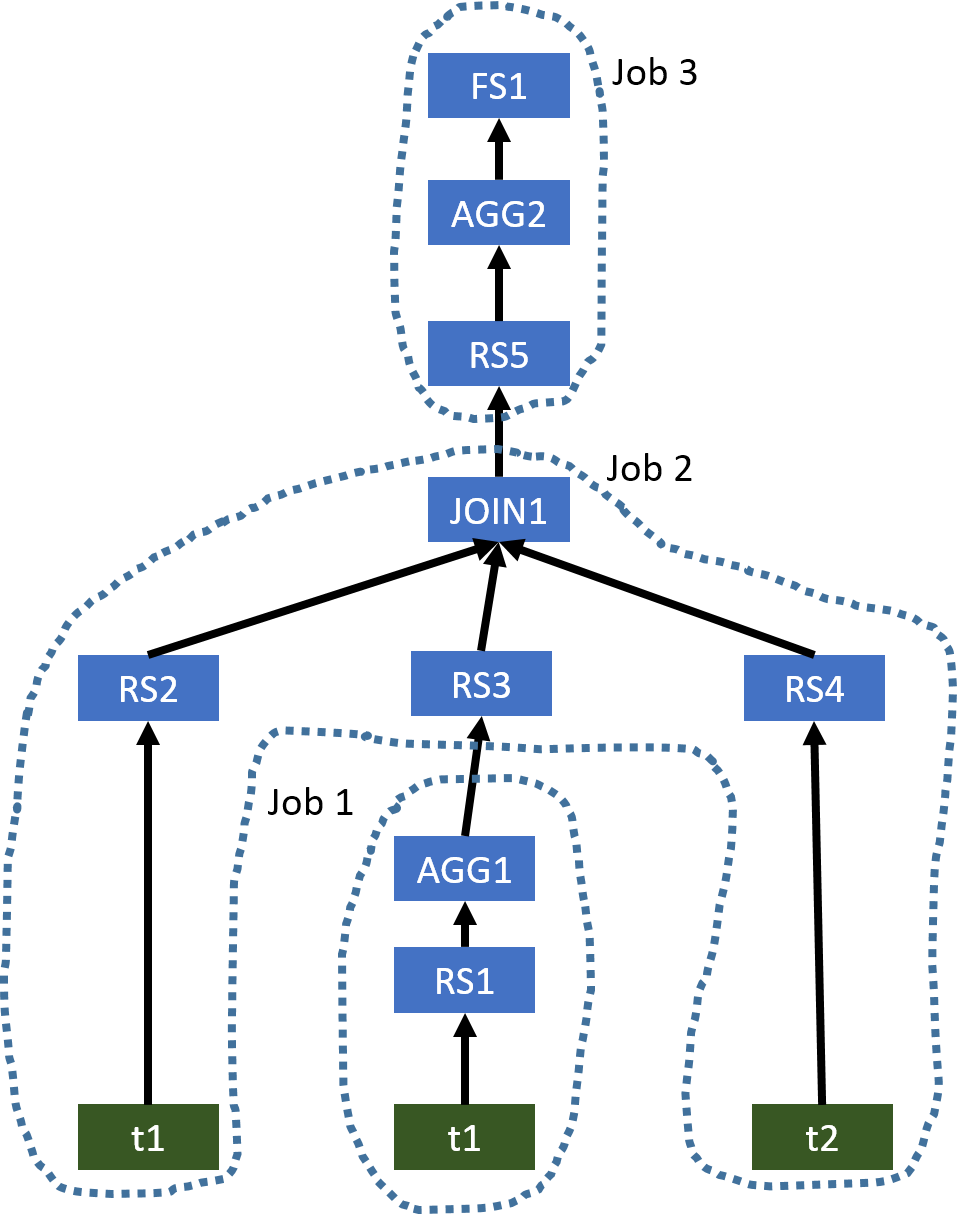 Figure 3: The original operator tree of Example 2 generated by Hive

This example is similar to Example 1. The optimized operator tree only needs a single MapReduce job, which is shown below. 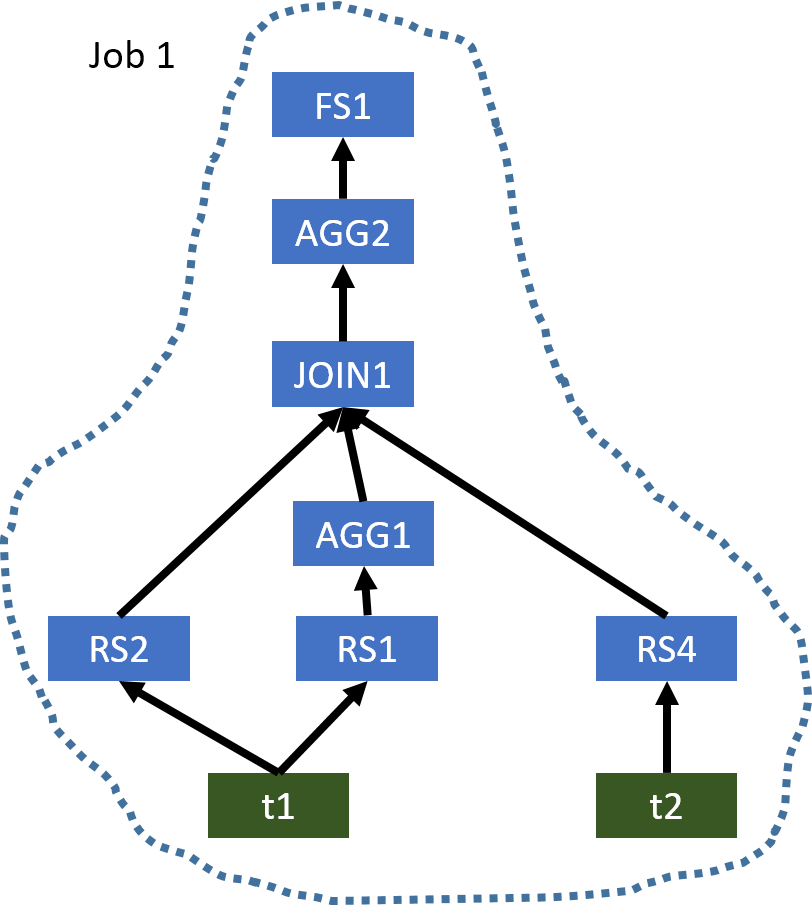 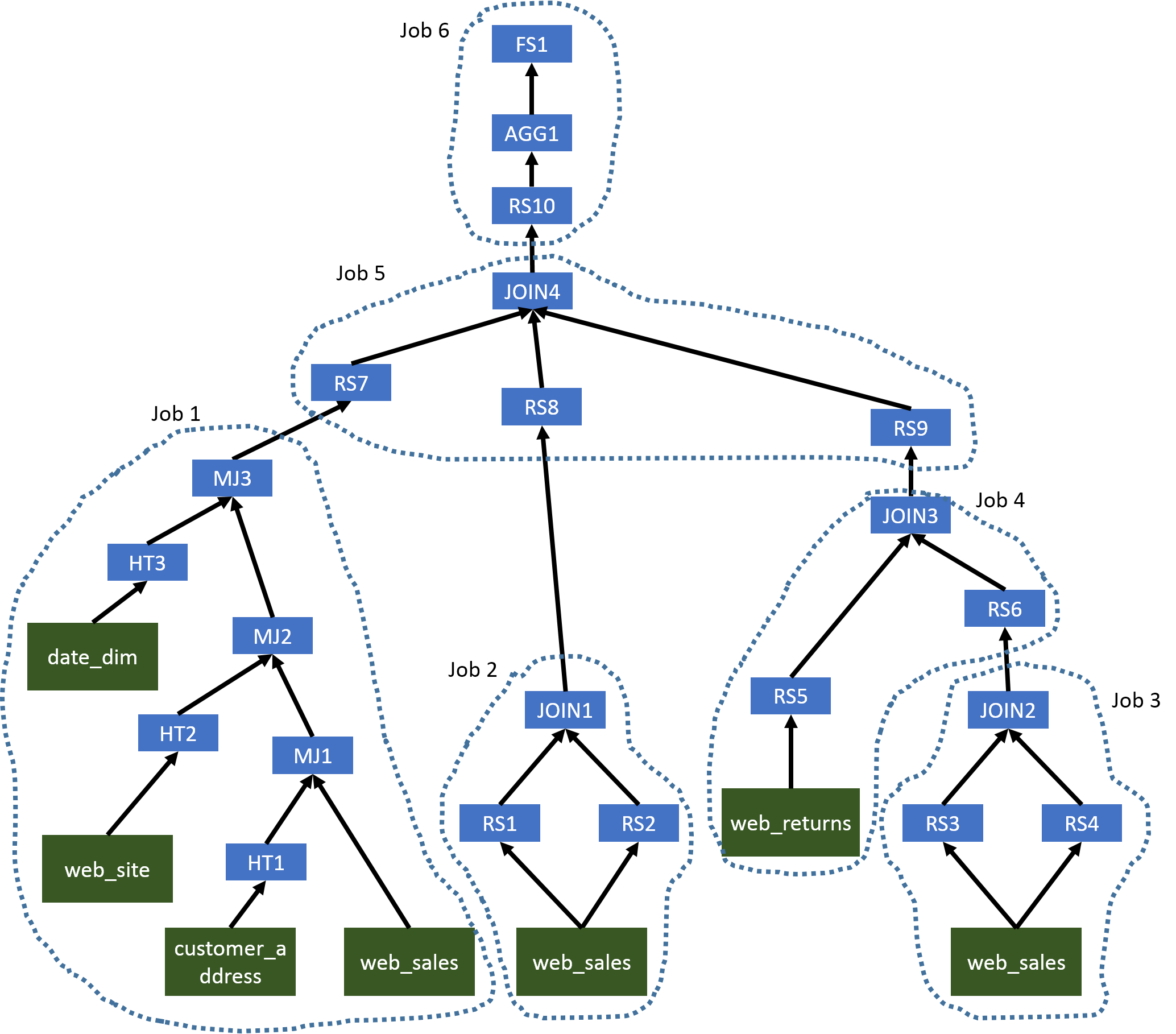 Figure 5: The original operator tree of Example 3 generated by Hive

In this complex query, we will first have several MapJoins (MJ1, MJ2, and MJ3) which can be evaluated in the same Map phase. Since JOIN1, JOIN2, JOIN3, and JOIN4 use the same column as the join key, we can use a single MapReduce job to evaluate all operators before AGG1. The second MapReduce job will generate the final results. The optimized operator tree is shown below. 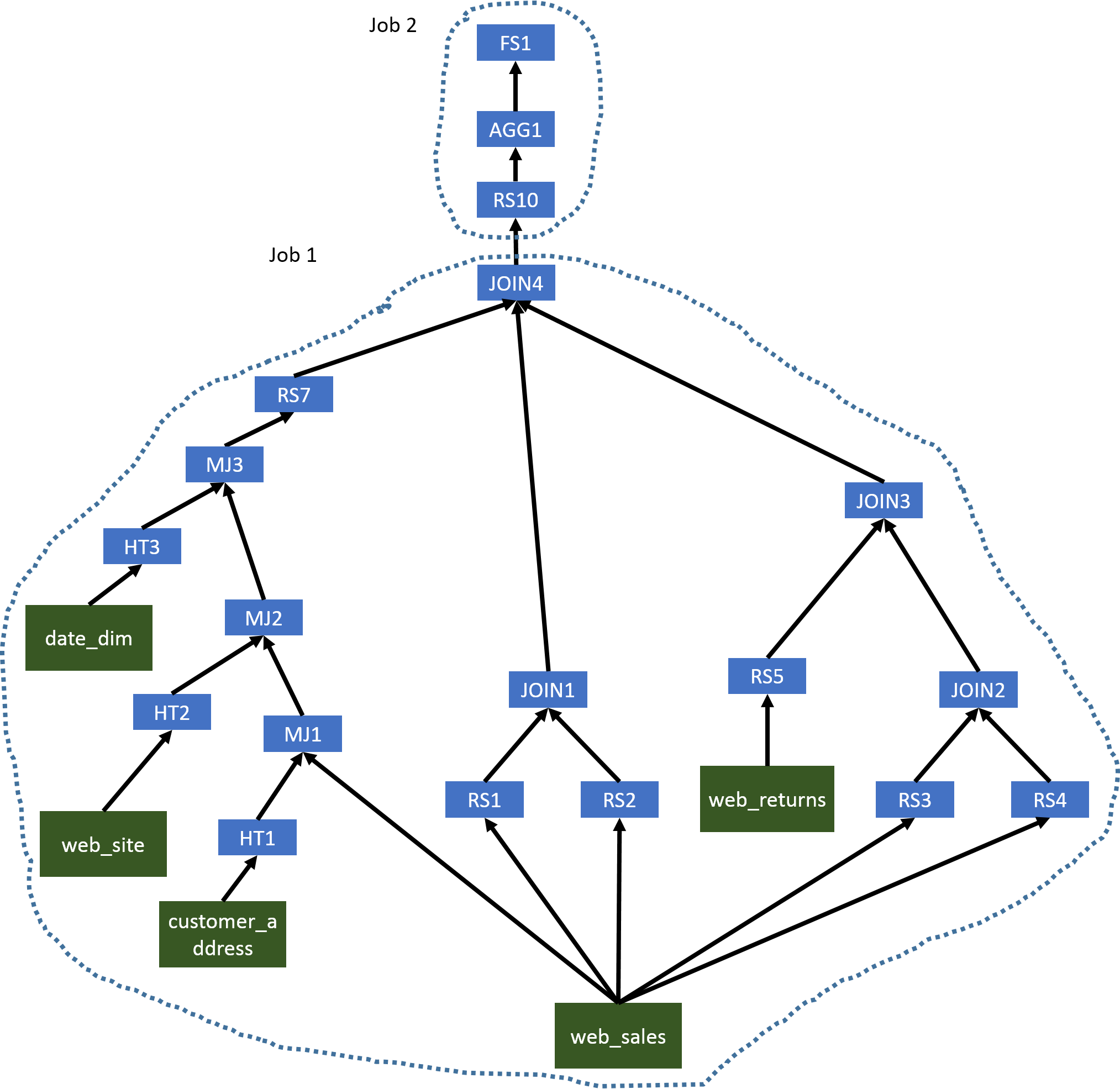 In Hive, a submitted SQL query needs to be evaluated in a distributed system. When evaluating a query, data may need to shuffled sometimes. Based on the nature of different data operations, operators in Hive can be divided to two categories.

For a complex query, it is possible that a input table is used by multiple MapReduce tasks. In this case, this table will be loaded multiple times when the original operator tree is used. Also, when generating those ReduceSinkOperators, Hive does not consider if the corresponding operator requiring data shuffling really needs a re-partitioned input data. For example, in the original operator tree of Example 1 (Figure 1), AGG1, JOIN1, and AGG2 require the data been shuffled in the same way because all of them require the column key to be the partitioning column in their corresponding ReduceSinkOperators. But, Hive is not aware this correlation between AGG1, JOIN1, and AGG2, and still generates three MapReduce tasks.

Interested readers may refer to our implementation for details.

In the Reduce phase, the ExecReducer will forward all reduce input rows to DemuxOperator first. Currently, blocking operators in the reduce phase operator tree share the same keys. Other cases will be supported in future work. Then, DemuxOperator will forward rows to their corresponding operators. Because a Reduce plan optimized Correlation Optimizer can be a tree structure, we need to coordinate operators in this tree to make the Reduce phase work correctly. This coordination mechanism is implemented in ExecDriver, DemuxOperator and MuxOperator.

For every row sent to the ExecDriver, it also has a tag assigned by a corresponding RediceSinkOperator at the Map phase. In a row group (rows having the same key), rows are also sorted by their tags. When the DemuxOperator sees a new tag coming, it knows all child operators associated with tags smaller than this new coming tag will not have any input within the current row group. Thus, it can call endGroup and processGroup of those operators earlier. With this logic, within a row group, the input rows of every operator in the operator tree are also ordered by tags, which is required by JoinOperator. This logic also makes rows in the buffer of an operator be emitted as quickly as possible, which avoids unnecessary memory footprint contributed from buffering unnecessary rows.