These requests are considered complete when either (a) the criteria they requested is complete or (b) some timeout occurs.

We intend to expand the use of this delayed request facility for various additional purposes including partition assignment and potentially quota enforcement.

The number of these asynchronous operations in flight at any time scales with the number of connections, which for Kafka is often tens of thousands.

A naive implementation of these would simply block the thread on the criteria, but this would not scale to the high number of in flight requests Kafka has.

The current approach uses a data structure called the "request purgatory". The purgatory holds any request that hasn't yet met its criteria to succeed but also hasn't yet resulted in an error. This structure holds onto these uncompleted requests and allows non-blocking event-based generation of the responses. This approach is obviously better than having a thread per in-flight request but our implementation of the data structure that accomplishes this has a number of deficiencies. The goal of this proposal is to improve the efficiency of this data structure.

The request purgatory consists of a timeout timer and a hash map of watcher lists for event driven processing. A request is put into a purgatory when it is not immediately satisfiable because of unmet conditions. A request in the purgatory is completed later when the conditions are met or is forced to be completed (timeout) when it passed beyond the time specified in the timeout parameter of the request. Currently (0.8.x) it uses Java DelayQueue to implement the timer.

By setting this configuration parameter low, the server can virtually avoid the memory problem. However, the server must pay a significant performance penalty if it scans all lists too frequently.

The goal of the new design is to allow immediate deletion of a completed request and reduce the load of expensive purge process significantly. It requires cross referencing of entries in the timer and the requests. Also it is strongly desired to have O(1) insert/delete cost since insert/delete operation happens for each request/completion.

To satisfy these requirements, we propose a new purgatory implementation based on Hierarchical Timing Wheels.

A simple timing wheel is a circular list of buckets of timer tasks. Let u be the time unit. A timing wheel with size n has n buckets and can hold timer tasks in n * u time interval. Each bucket holds timer tasks that fall into the corresponding time range. At the beginning, the first bucket holds tasks for [0, u), the second bucket holds tasks for [u, 2u), …, the n-th bucket for [u * (n -1), u * n). Every interval of time unit u, the timer ticks and moved to the next bucket then expire all timer tasks in it. So, the timer never insert a task into the bucket for the current time since it is already expired. The timer immediately runs the expired task. The emptied bucket is then available for the next round, so if the current bucket is for the time t, it becomes the bucket for [t + u * n, t + (n + 1) * u) after a tick. A timing wheel has O(1) cost for insert/delete (start-timer/stop-timer) whereas priority queue based timers, such as java.util.concurrent.DelayQueue and java.util.Timer, have O(log n) insert/delete cost.
A major drawback of a simple timing wheel is that it assumes that a timer request is within the time interval of n * u from the current time. If a timer request is out of this interval, it is an overflow. A hierarchical timing wheel deals with such overflows. It is a hierarchically organized timing wheels. The lowest level has the finest time resolution. As moving up the hierarchy, time resolutions become coarser. If the resolution of a wheel at one level is u and the size is n, the resolution of the next level should be n * u.  At each level overflows are delegated to the wheel in one level higher. When the wheel in the higher level ticks, it reinsert timer tasks to the lower level. An overflow wheel can be created on-demand. When a bucket in an overflow bucket expires, all tasks in it are reinserted into the timer recursively. The tasks are then moved to the finer grain wheels or be executed. The insert (start-timer) cost is O(m) where m is the number of wheels, which is usually very small compared to the number of requests in the system, and the delete (stop-timer) cost is still O(1).

In this design, we propose to use our own implementation of doubly linked list for the buckets in a timing wheel. The advantage of doubly linked list that it allows O(1) insert/delete of a list item if we have access link cells in a list.
A timer task saves a link cell in itself when enqueued to a timer queue. When a task is completed or canceled, the list is updated using the link cell saved in the task itself.

A simple implementation may use a thread that wakes up every unit time and do the ticking, which checks if there is any task in the bucket. This can be wasteful if requests are sparse. We want the thread to wake up only when when there is a non-empty bucket to expire. We will do so by using java.util.concurrent.DelayQueue similarly to the current implementation, but we will enqueue task buckets instead of individual tasks. This design has a performance advantage. The number of items in DelayQueue is capped by the number of buckets, which is usually much smaller than the number of tasks, thus the number of offer/poll operations to the priority queue inside DelayQueue will be significantly smaller.

Requests are actively completed by a separate thread. Requests that are supposed to be completed before timeout are enqueued to another DelayQueue. And a separate thread keeps polling and completes them. There is no guarantee of accuracy in terms of actual completion time.

The JVM heap size is set to 200m to reproduce a memory tight situation. 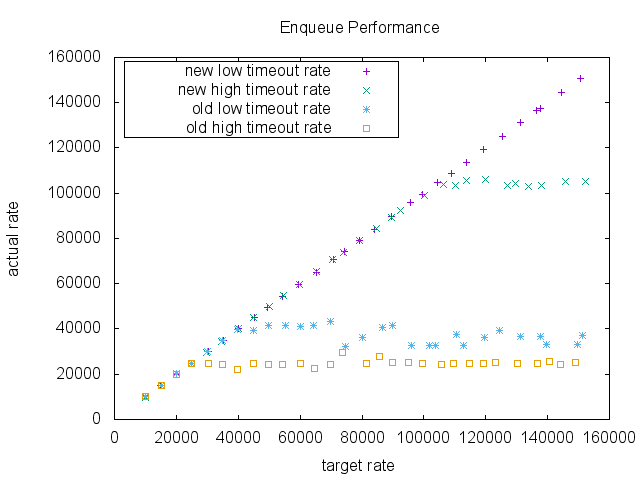 CPU usage is significantly better in the new implementation. 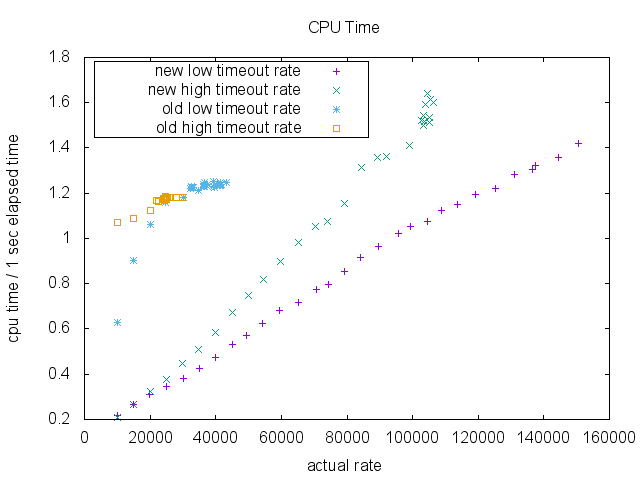 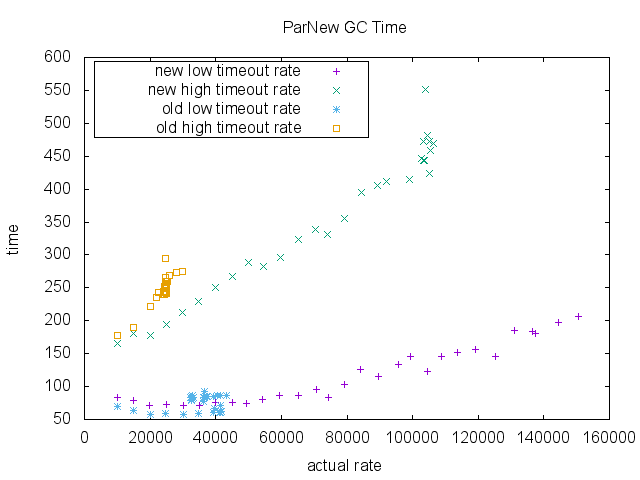 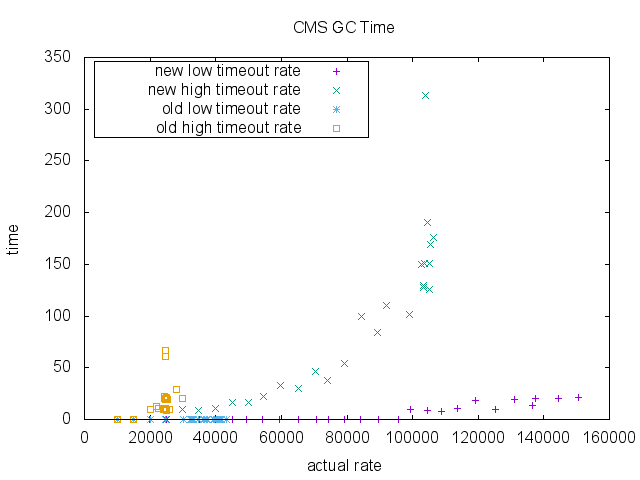 In the new design, we use Hierarchical Timing Wheels for the timeout timer and DelayQueue of timer buckets to advance the clock on demand. Completed requests are removed from the timer queue immediately with O(1) cost. The buckets remain in the delay queue, however, the number of buckets is bounded. And, in a healthy system, most of the requests are satisfied before timeout, and many of the buckets become empty before pulled out of the delay queue. Thus, the timer should rarely have the buckets of the lower interval. The advantage of this design is that the number of requests in the timer queue is the number of pending requests exactly at any time. This allows us to estimate the number of requests need to be purged. We can avoid unnecessary purge operation of the watcher lists. As the result we achieve a higher scalability in terms of request rate with much better CPU usage.