Note: Please feel free to comment on the Google Doc. We will merge the finalized proposal back here.

We propose to add Horovod support to MXNet. This will help our users achieve goal of linear scalability to 256 GPUs and beyond. Naturally, we will support multi-machine CPU training too.

This project is seeking to provide an alternative distributed training solution for MXNet customers. It offers customers the following value proposition:

To run the training script, user needs to call:

Note: This call is valid when using OpenMPI. To improve user experience, this training script may be wrapped into a Bash script in the future.

Instead of KVStore calls, this API supports the following calls at the Python interface level (for now, in the future we may add other language bindings) after importing the Horovod package (i.e. import horovod as hvd):

The following are the two key calls from the Horovod API warrant additional explanation: 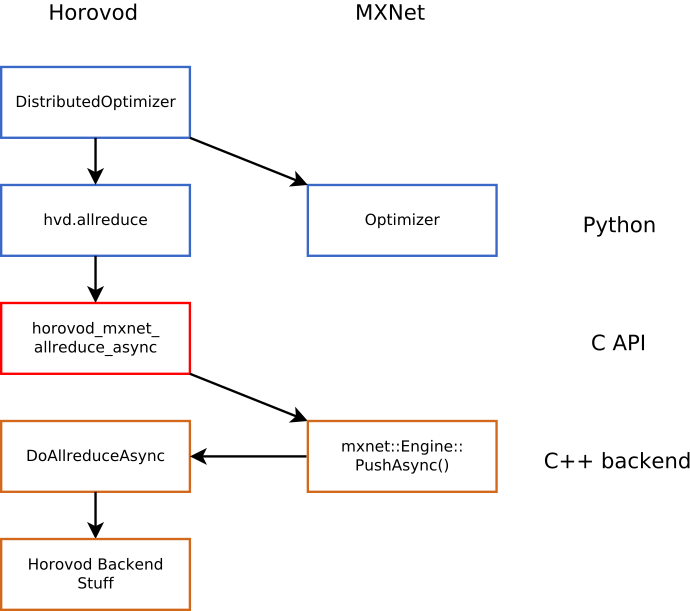 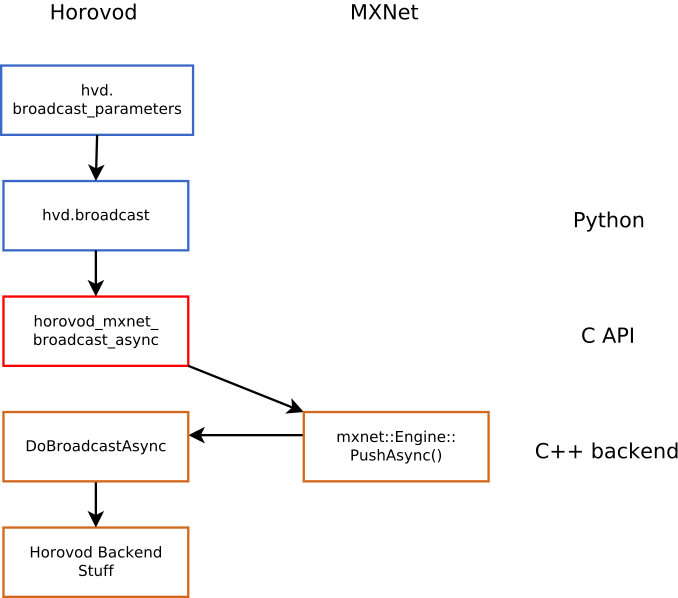 Going through how Allreduce works, the DistributedOptimizer is used to wrap an MXNet Optimizer class:

The way we plan accomplish decoupling between Horovod and MXNet while ensuring the MXNet engine correctly recognizes dependencies on the NDArrays that are being Allreduce’d together is by calling MXNet engine from Horovod source code. This introduces a compile-time dependency on MXNet when compiling Horovod.

This behaviour is the same as when doing pip install horovod for TensorFlow and PyTorch support. When those libraries are not present, Horovod installation will fail.

This will allow the source code that supports Horovod core functionalities (tensor fusion, gradient compression, MPI and NCCL support) to be reused for MXNet.

We built another approach whose served the following purposes (Note: this prototype design will not be released):

Our prototype uses the KVStore API to call Horovod backend. We expose a new KVStore class that can be selected by the user.

In addition to the standard KVStore calls, this API supports the following calls at the Python interface level:

Shown below is the kv.broadcast method. The other method are called using a similar manner and are thus not shown: 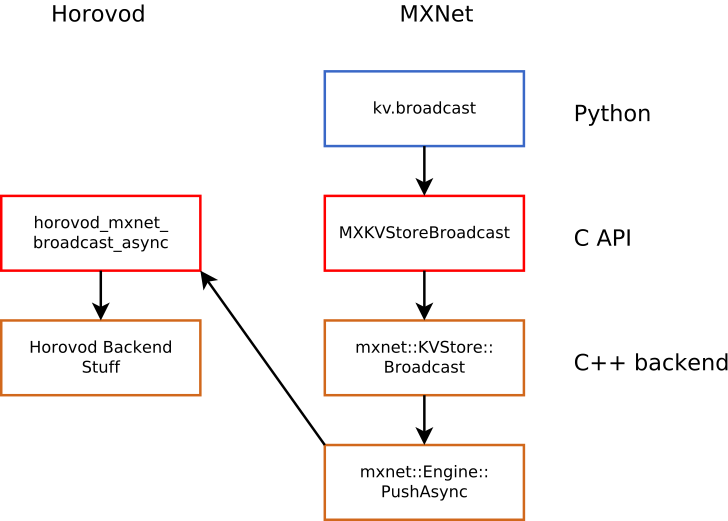 Pros and Cons of Final Design vs. Prototype Design 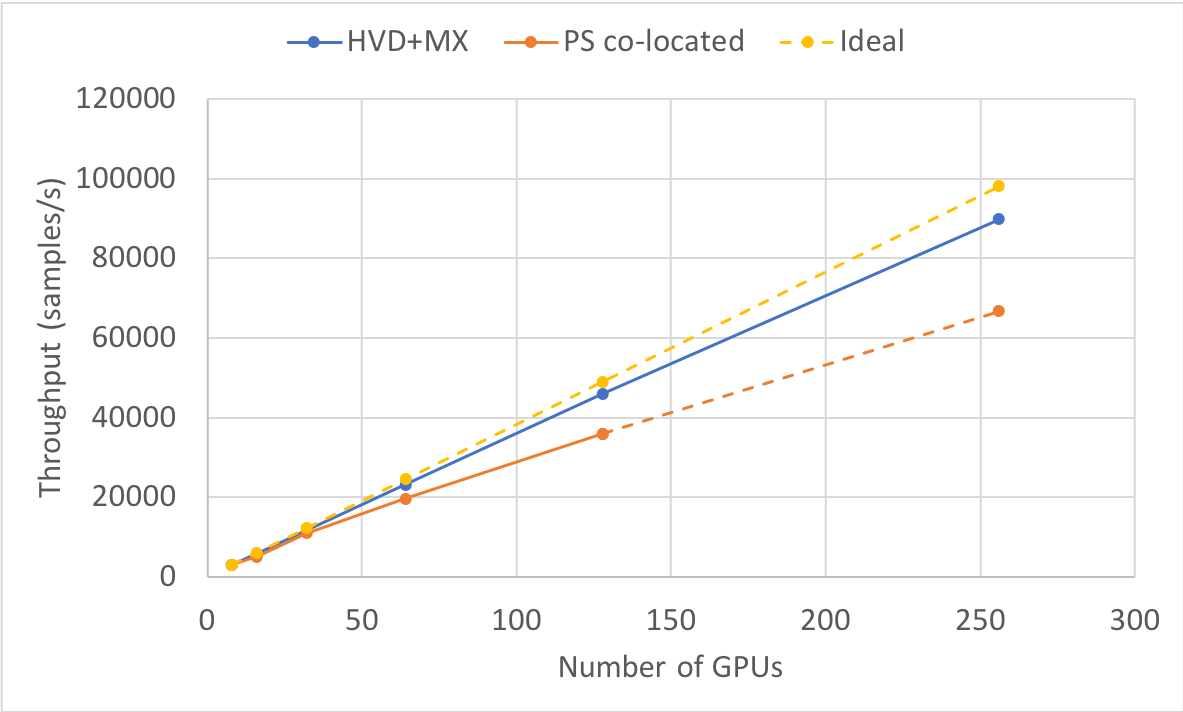 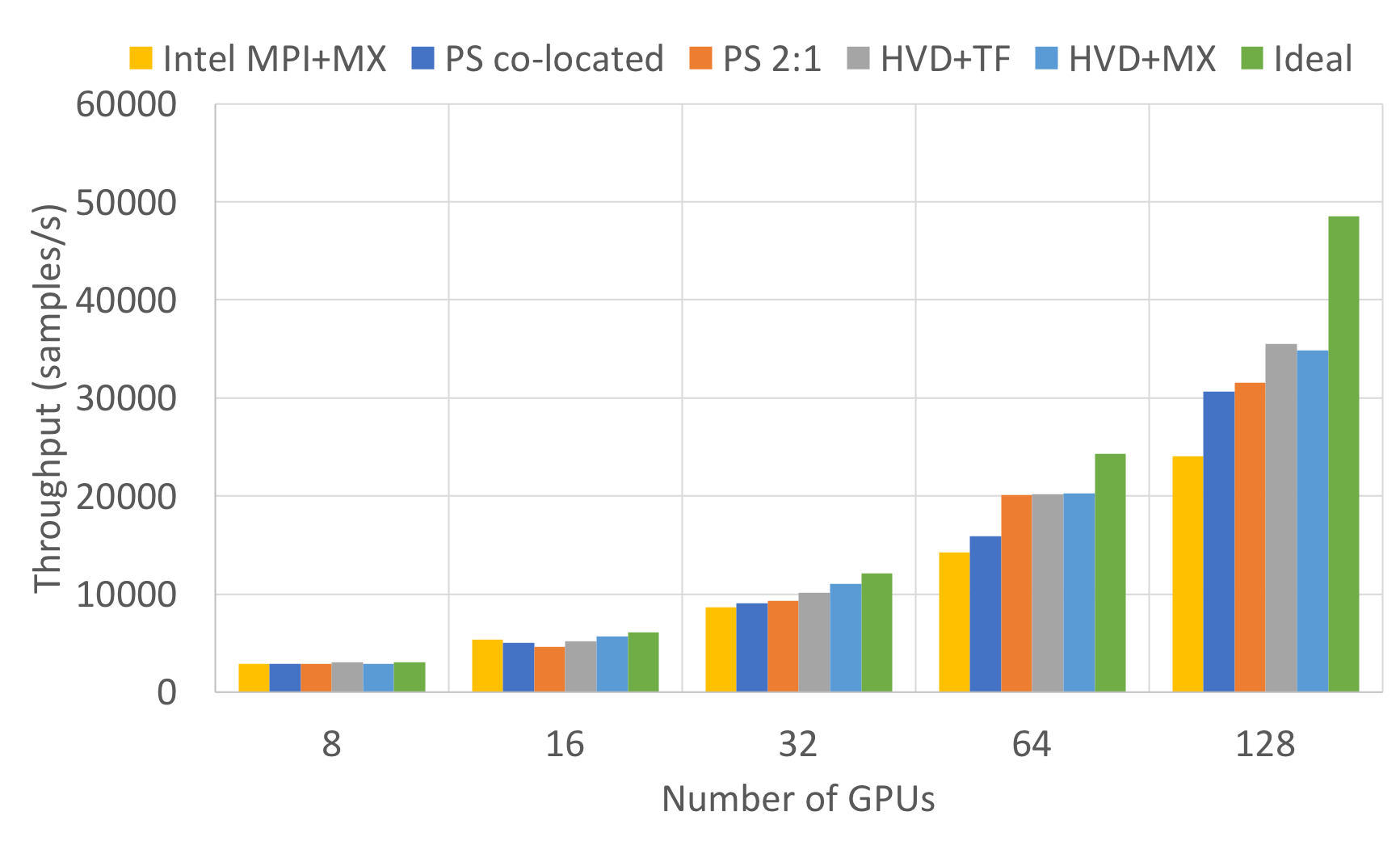 Since CPU support and GPU fp16 support are listed as experimental at the moment, we do not have performance numbers for them.

We will be introducing unit tests for most public Horovod functions at the Python level:

These will be contained under the path "horovod/test/test_mxnet.py", next to "test_tensorflow.py" and "test_torch.py". To run the test:

Automated performance tests will be outside the scope of this project. For example, the Horovod repository itself does not have any performance tests. They provide a pointer to the repo from https://github.com/tensorflow/benchmarks, and say that the user will be able to replicate the performance numbers shown in the paper [1].

Unlike PyTorch and TensorFlow, MXNet is not designed to be used in this manner. Typical MXNet usage involves controlling all GPUs on a single-machine from 1 master process. Therefore, if one calls MXNet from 8 different processes, the memory usage will look as follows:

This means that if we want to run MXNet at the optimal batch size for performance, which requires each GPU to be near its memory limit, all those extra memory allocations will quickly cause an out-of-memory error in GPU0. We tracked down the issue to CPUPinned always allocating memory to GPU0 even if the user requests it to be allocated to a different GPU. We are still working on our PR fix here: https://github.com/apache/incubator-mxnet/pull/12031

For a better, longterm solution, it may be necessary to introduce a mechanism that uses CUDA_VISIBLE_DEVICES macro to only make given GPUs visible to each process.

Since we are linking with the MXNet shared library, we need to include the correct headers in the PyPi package. In order to avoid ABI compatibility issues, we may need to add additional APIs (e.g. mx.config.get_compile_flags or mx.config.get_link_flags) that return the compilation and linker flags respectively. Then, the Horovod installation can proceed using the exact same flags.

Gluon support can be added by: