Samza framework enables its users to build stateful stream processing applications–that is, applications that remember information about past events in a local state(store), which will be then used to influence the processing of future events from the stream. Local state is a fundamental and enabling concept in stream processing which is required and essential to support a majority of common use cases such as stream-stream join, stream-table join, windowing etc.

Every stream application in samza has many task instances which contains a custom user-defined function for processing events from a stream. Each task instance will have one to many associated local stores. Local store of a task instance is backed up by an log compacted kafka topic referred to as change-log. When a task instance commits, incremental local task store updates are flushed to the kafka topic. When a task instance runs on a host that doesn’t have latest local store, it’s restored by replaying messages from the change-log stream. For large stateful jobs, this restoration phase takes longer time, thus preventing the application from starting up and processing events from the input streams. Host affinity is a feature that maintains stickiness between a task and physical host and offers best-effort guarantees that a task instance will be assigned to run on the same physical it had ran before. This document discusses some potential approaches to support this feature in standalone deployment model.

JobModel is the data model in samza that logically represents a samza job. The JobModel hierarchy is that samza jobs have one to many containers(ContainerModel), and each container has one to many tasks(TaskModel). Each data model contains relevant information, such as logical id, partition information, etc. Existing host affinity implementation in yarn is accomplished through the following two phases:

Here’re the list of important and notable differences in processor and JobModel generation semantics between yarn and standalone deployment model: 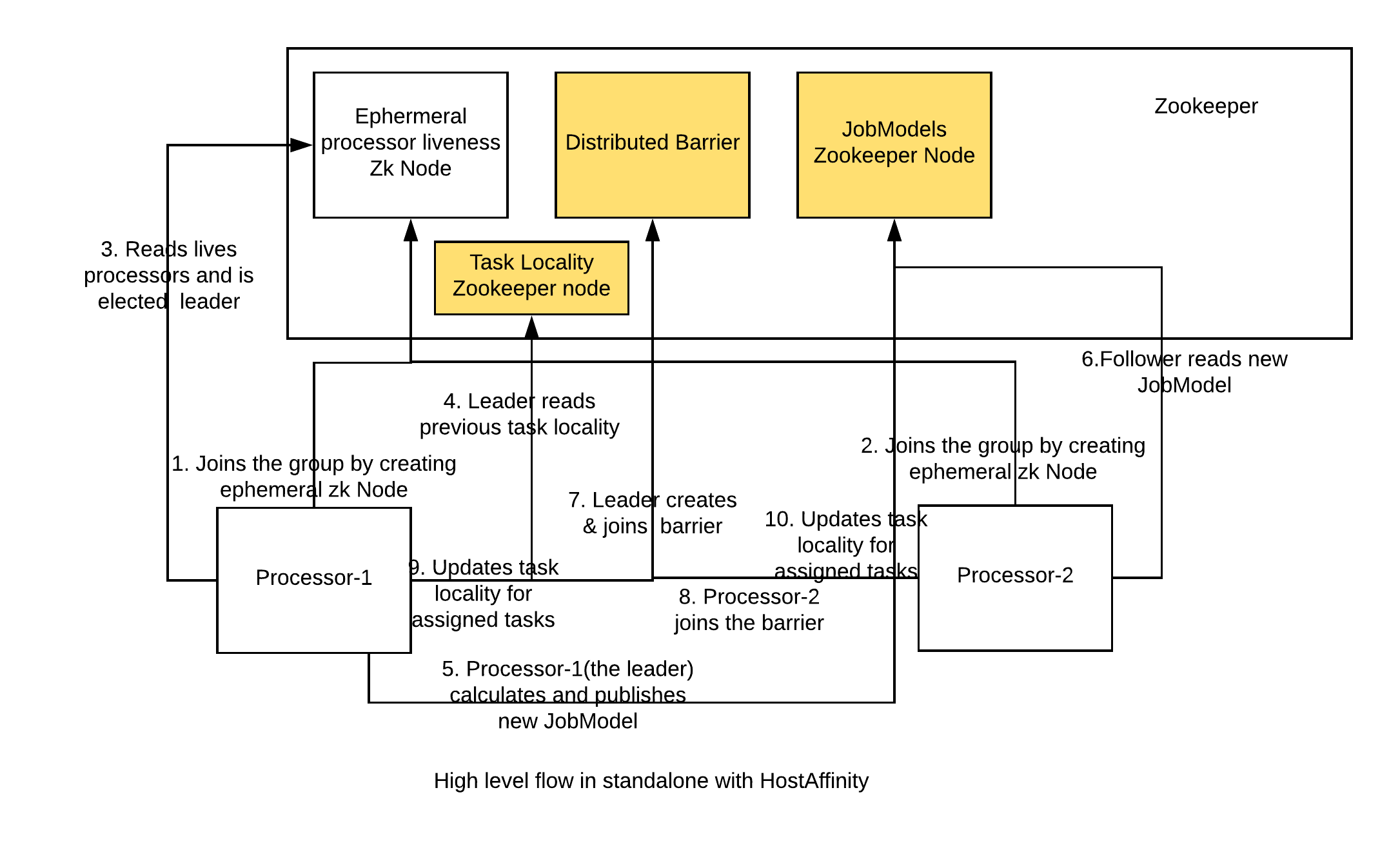 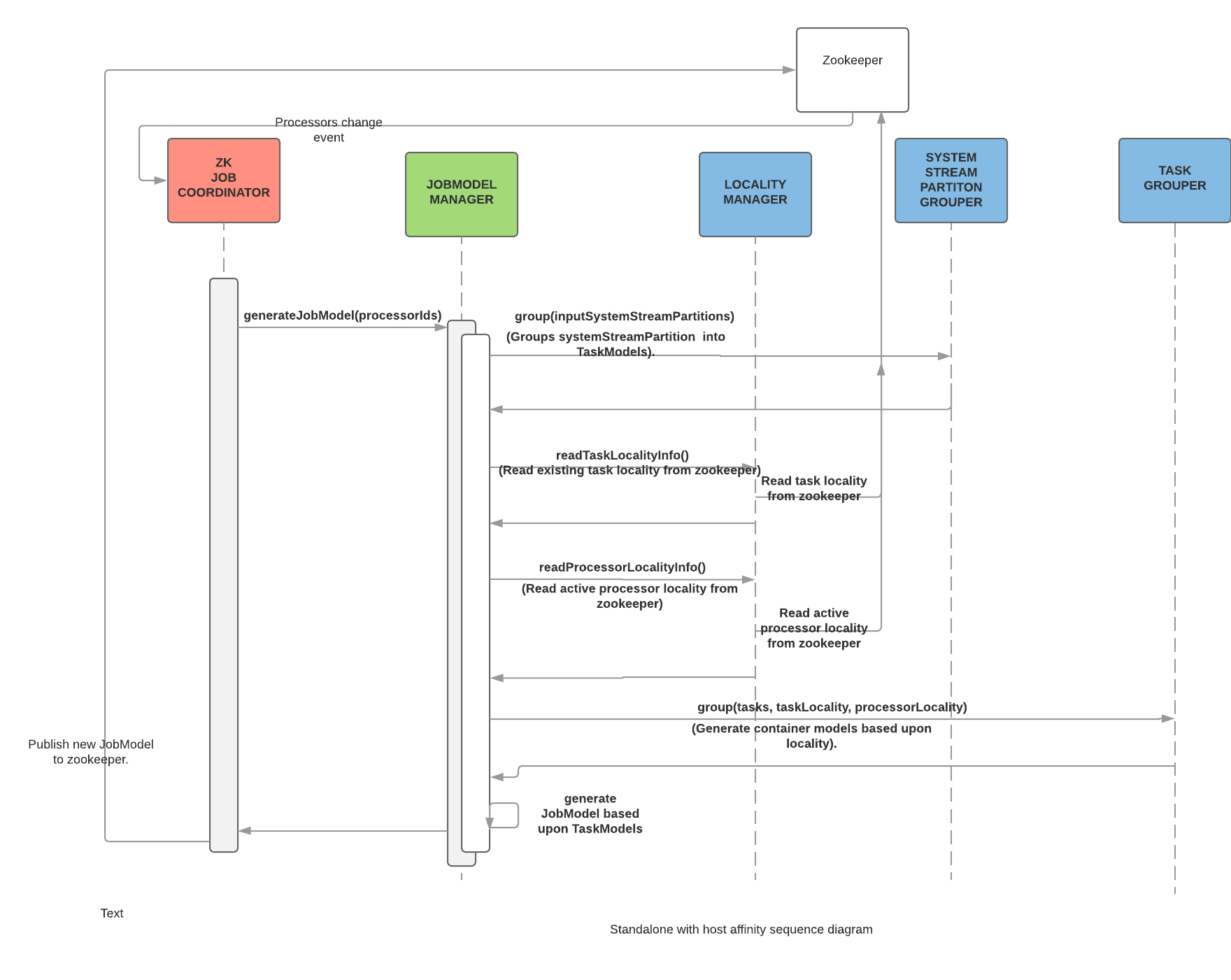 In standalone landscape, the file system location to persist the local state should be provided by the users through stream processor configuration(by defining local.store.dir configuration). The configuration `local.store.dir` is expected to be preserved across processor restarts to reuse preexisting local state. It’s expected that the stream processor java process will be configured by user to run with sufficient read/write permissions to access the local state directories created by any processor in the group. The local store file hierarchy/organization followed in samza-yarn deployment model for both high and low level API will be followed in standalone.

JobModel is a data access object used to represent a samza job in both yarn and standalone deployment models. With existing implementation, JobModel requires LocalityManager(which is tied to coordinator stream) to read and populate processor locality assignments. However, since zookeeper is used as JobModel persistence layer and coordinator stream doesn’t exist in standalone landscape, it’s essential to remove this LocalityManager binding from JobModel and make JobModel immutable. Any existing implementations(ClusterBasedJobCoordinator, ContainerProcessManager) which depends upon this binding for functional correctness in samza-yarn, should directly read container locality from the coordinator stream instead of getting it indirectly via JobModel.

Semantics of host affinity with ‘run.id’

LocationId reported by the live processors of the group and last reported task locality will be used to calculate the task to container assignment in standalone. Preferred host mapping will be used for task and processor locality in case of yarn. Any new task/processor for which grouping in unknown(unavailable in preferred host/task-locality in underlying storage layer), will be treated as any_host during assignment.

Here are few reasons supporting the modification of TaskNameGrouper interface and removing LocalityManager from interface methods:

This contains all the changes mentioned in proposed solution with a differing interface changes as listed below.

Do not change any existing interfaces and pass the previous generation ContainerModel, TaskModels to TaskNameGrouper implementations through the config object and document it in the interface contract.Cons: