When we take a bookie out of the cluster, we have no idea of whether doing so would cause any quorum loss or not.

For example, if we've already lost or removed a few bookies, the auto rereplicator might be still replicating the ledgers for the lost bookies or even already failed to replicate some ledgers. Now we want to remove another bookie, and to make sure we don't lose any data, we need to know whether the ledgers on the lost bookies which shares a quorum with this bookie have all been replicated or not. However, there's no bookie lifecycle state which could indicate whether the bookie is still being replicating or already replicated. So removing a bunch of bookies too quickly would potentially cause some quorum loss.

Situations like this are listed but not limited to:

Currently, to remove a few bookies out of cluster, we have to do a lot of manual operations:

The manual operation for a single bookie is not that bad, but when we are dealing with hundreds and thousands of bookies, the operations will become a pain. And there's currently no easy way to automate the whole process because we need to do a lot of manual checks to prevent data loss as much as we could.

However, if we introduce lifecycle state and add a HTTP management interface, we're able to automate the whole lifecycle for bookkeeper operation, and we would get a lot of benefits:

An active bookie is a bookie that has been registered in the cluster and is ready to serve the traffic at any time. A bookie that is in active state doesn’t necessary mean that the bookie is running. An active bookie could be a running bookie serving read and write traffic, a read only bookie, or even a bookie registered but not running the server.

For those draining-failed bookies, we should manually take care of them, we can move the state into the drained state only after fixing the "bad" ledgers. But there's a concern that if we have a lot of draining-failed bookie, there would be a lot of manual work, which would be conflicted with the goal of automating the whole lifecycle process. So in the future, we might need a better solution or add some strict rules to auto-fix the "bad" ledgers.

A bookie will turn into drained state from draining state once all its ledgers have been replicated successfully. Drained state indicates that the bookie is now safe to be removed from the cluster since we guarantee that all ledgers on that bookie has been replicated successfully and removing the bookie wouldn't cause any data loss. Drained bookie should only serve read traffic, no write traffic.

Where do we persist lifecycle state?

In Zookeeper, we can create a znode for the lifecycle state under the cookie znode to store the state data: cookies/<ip:port>/state

How do we manage lifecycle state?

What will happen when we set a bookie to draining?

We have two ways to run Auditor and ReplicationWorker. We can either run within the bookie or outside of the bookkeeper cluster.

The following graph shows what roughly would happen when a set a bookie from Active to Draining state.

Note: The queue in the following graphs can be any abstract queue (ledger, zookeeper) 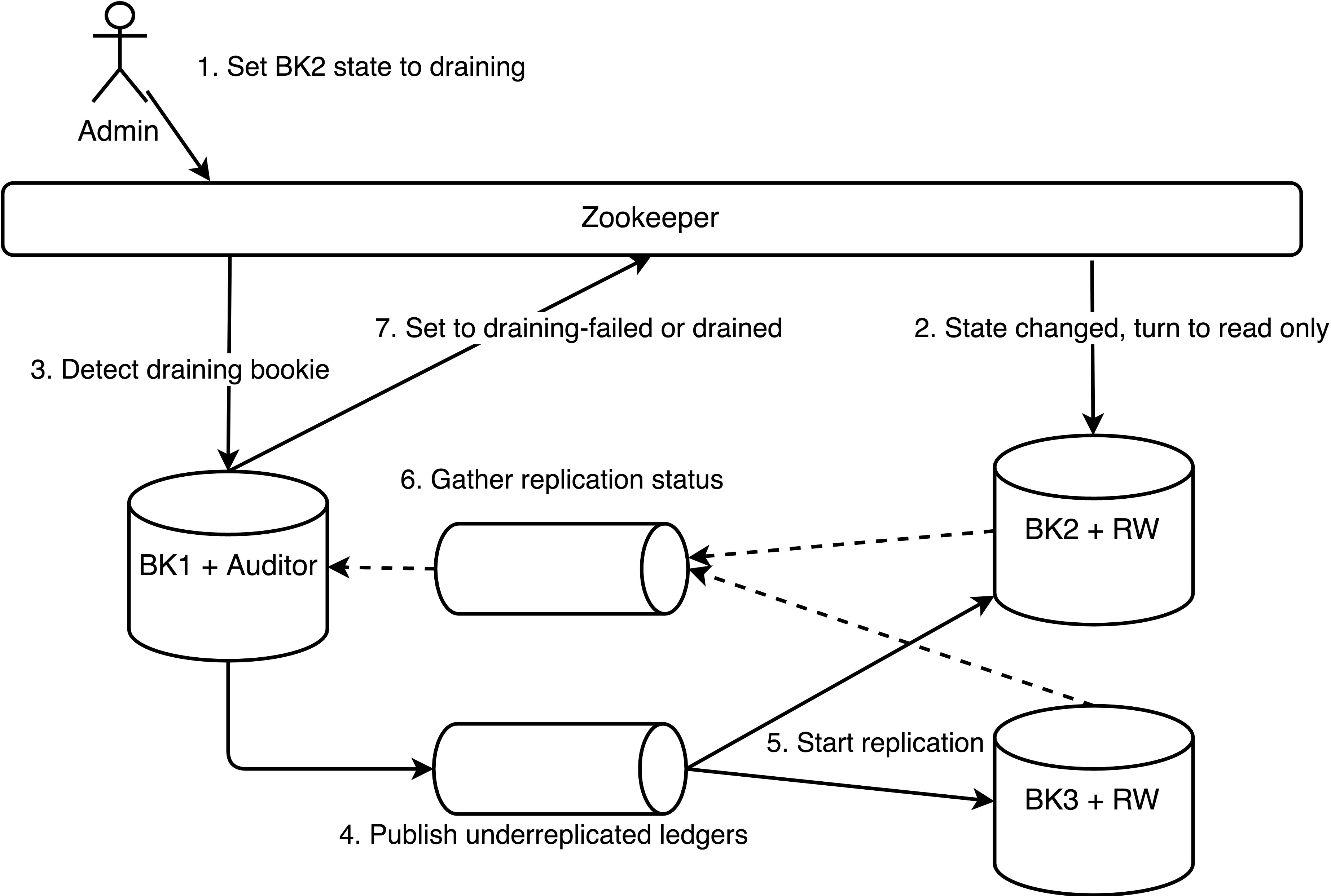 Scenario 2 - Run Auditor and ReplicationWorker in a separate job: 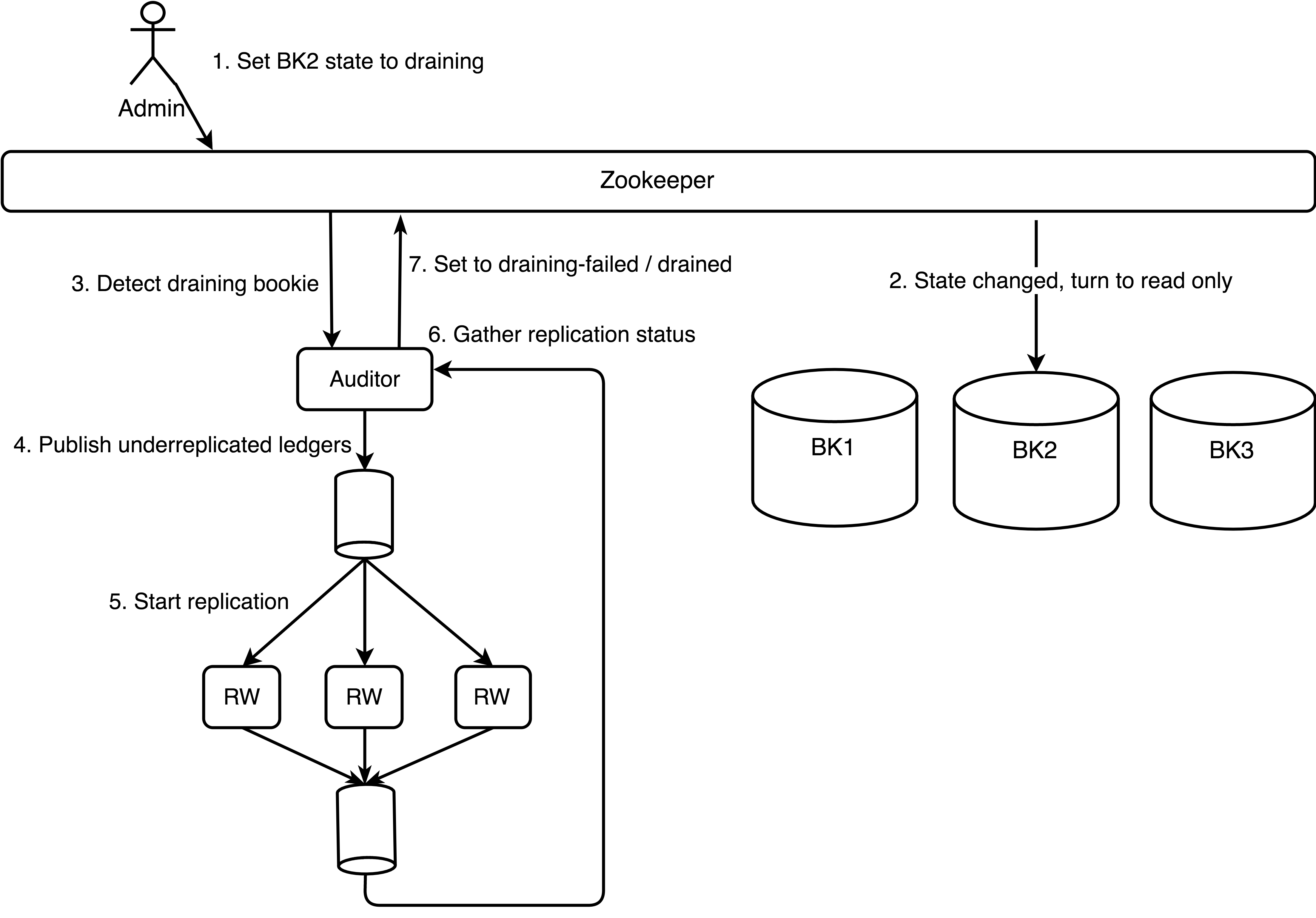 What shall we do with a drained bookie?

A drained bookie is safe to be removed from the cluster at any time. We need to delete the cookie and clear the lifecycle state before removing the bookie out of the cluster, otherwise, when the bookie comes back, it will still be in draining state, which means it can only serve in read-only mode.

Introducing new Bookkeeper Lifecycle State would reduce the chance of data loss doing operation and reduce some operation pain. However, it doesn't address the issue of operation automation.

This is why we want to introduce a HTTP management endpoint for Bookkeeper.

Where do we run HTTP server?