Currently in Flink, task scheduling is more or less constrained by the shuffle implementations. This will cause some problems in batch mode, mainly in the following aspects:

We believe the root cause of the above problems is that shuffle implementations put unnecessary constraints on task scheduling.

The config option "execution.batch-shuffle-mode" will have an additional valid value ALL_EXCHANGES_HYBRID for activating this feature.

We don’t see any other public API changes that are necessarily required at the moment. However, there are a few tuning knobs that we would like to decide whether to expose to users after finishing and trying out this feature. E.g., memory usage threshold for triggering spilling, number of buffers a SubpartitionFileReader should read ahead, etc. Ideally, we want to expose only a minimal set of necessary knobs, for better usability.

The proposal consists of changes in two parts: 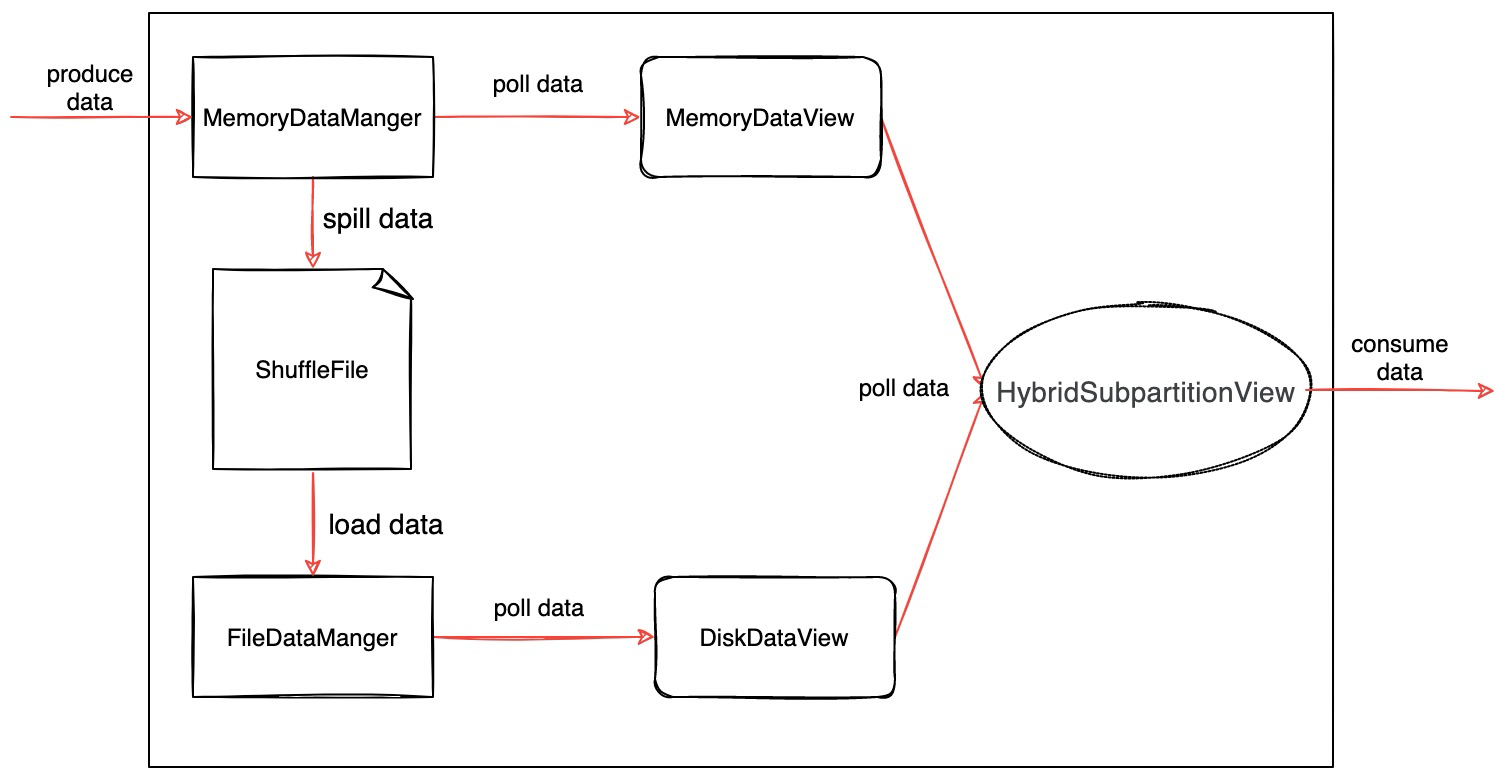 The above figure shows the main components of HybridResultPartition:

The MemoryDataManager manages the data in the memory as shown in the following figure: 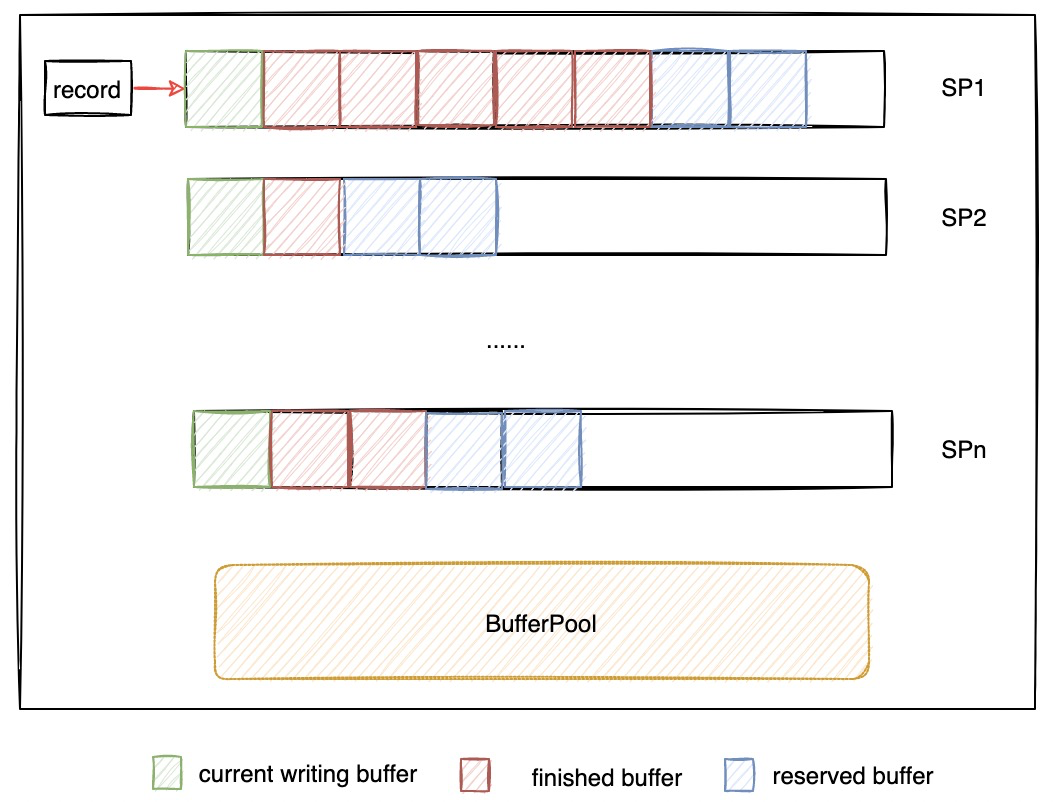 MemoryDataManager consists of a branch of buffer queues each corresponds to a subpartition, and a buffer pool shared by all subpartitions. New records are written to the last buffer of the corresponding subpartition queues. If there’s no buffer in the queue, or the last buffer does not have enough space for the incoming record, a new buffer will be polled from BufferPool and added to the end of the queue. All buffers except for the last one in a queue are considered finished, which means no more data will be written to them, thus they are ready for consumption and spilling. A buffer that is consumed / spilled will return to the pool.

To be specific, the following buffers should be spilled with higher priority:

An alternative strategy is to spill all data to the disk, as soon as the buffers are finished. The benefit is that, in case of failover, upstream tasks do not need to be restarted, as all the data it produces is persistent. However, that introduces extra IO workload, and may block the upstream task if the disk IO becomes the performance bottleneck. In the first version, we will consider a minimum spilling strategy. We may consider to also support a full spilling strategy in future, for scenarios where the failover cost is more crucial.

The FileDataManager manages the data in the disk as shown in the following figure: 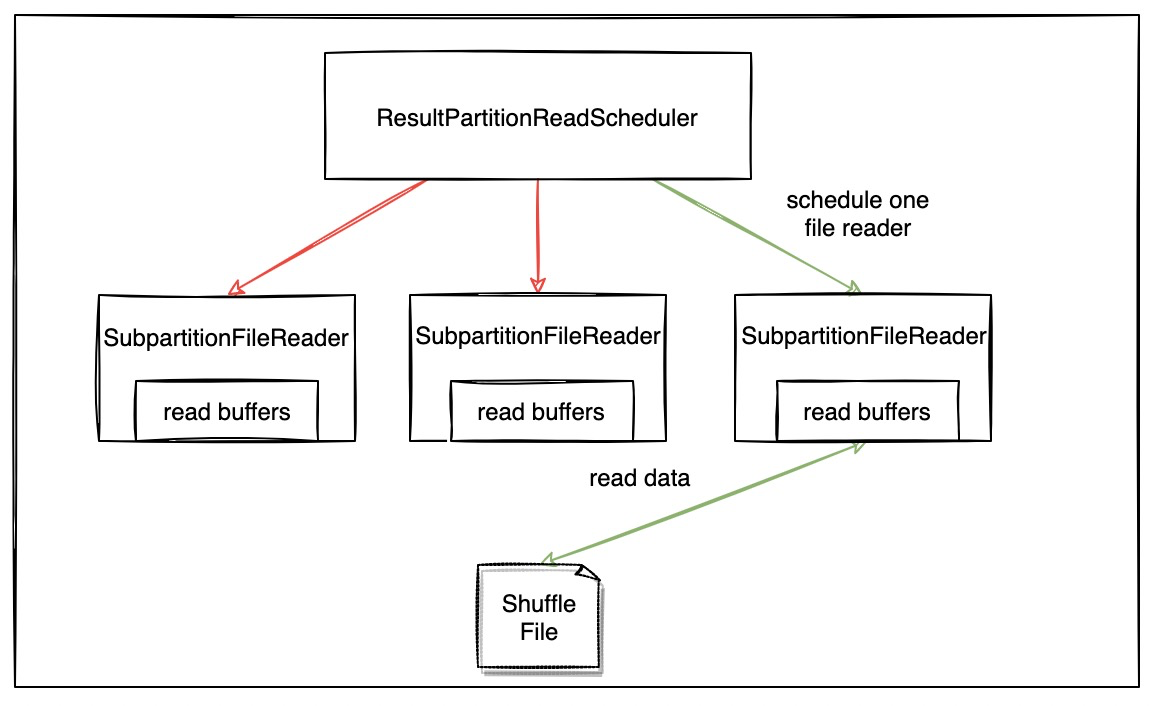 To improve the disk access performance, we apply the same IO scheduling mechanism from Sort-based Blocking Shuffle, which maximizes the sequential disk access over random access. For each connected downstream task, there will be a corresponding SubpartitionFileReader, which is responsible for preloading the spilled data from the shuffle file on the disk. And the ResultPartitionReadScheduler will be responsible for scheduling each SubpartitionFileReader for reading, according to the file offset they want to read. 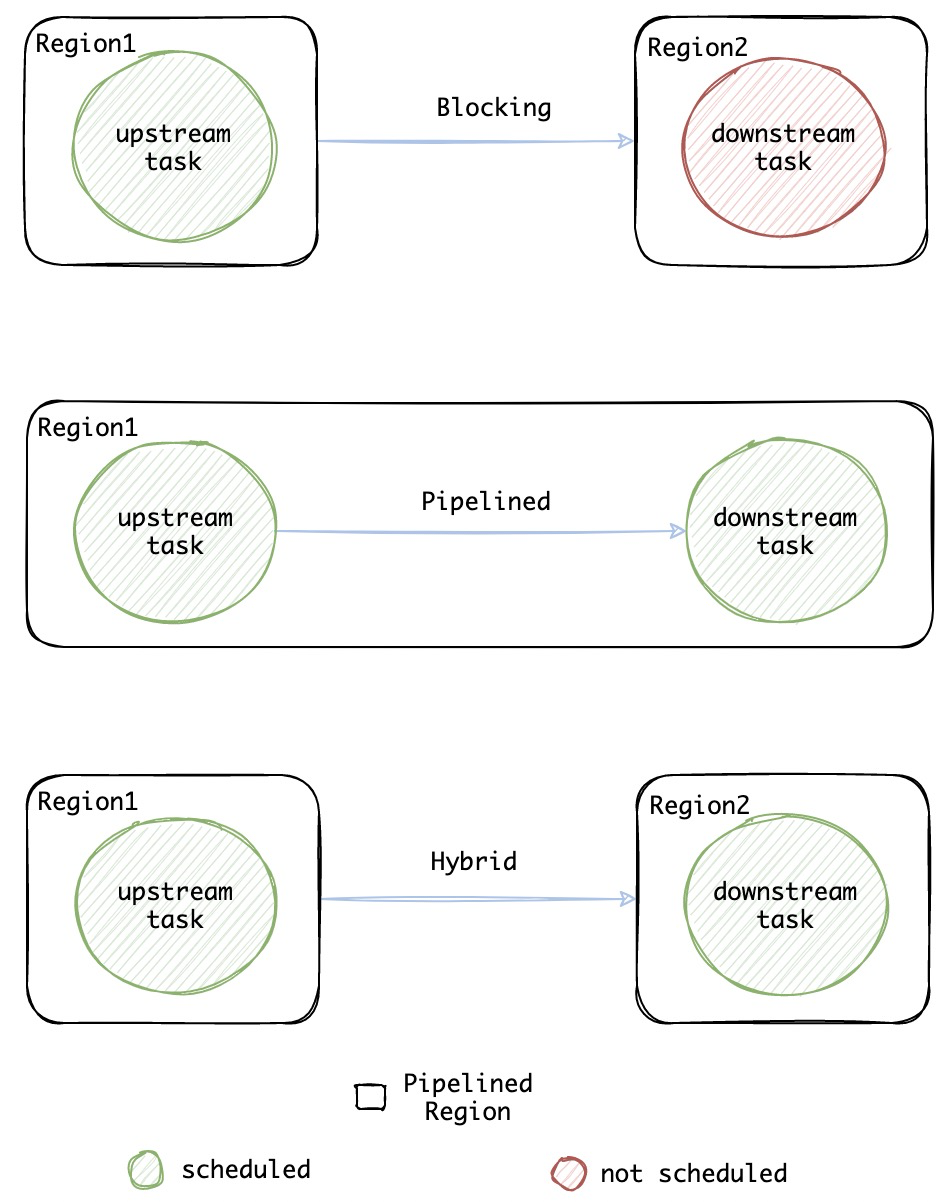 We introduce Hybrid as a new ResultPartitionType in addition to Blocking and Pipelined. As shown in the figure, depending on the context, Hybrid result partition needs to be treated in the same way as Blocking or Pipelined.

To better illustrate such differences, we’d also refactor the ResultPartitionType to reflect the different semantics of “must be pipelined” and “can be pipelined”.

In this way, we can benefit from the reduced scheduling constraints with barely any changes to the Scheduler and default PipelinedRegionSchedulingStrategy.

Please notice that the first version of Hybrid Shuffle does not support slot sharing. While the job can execute with a single slot (like blocking shuffle), it may take more slots than its max parallelism if provided. See Know Limitations for more details.

The implementation includes the following parts, among them, 2 depends on 1, but 2, 3 and 4 can be parallel, and 5 relies on them.

There should be no compatibility breaking changes.

We would first make this an opt-in feature that can be activated by a config option. In the long term, we hope to make it the default shuffle implementation for batch mode, once we are confident that it has stabilized.

Slot sharing is not supported

The first version of Hybrid Shuffle does not support slot sharing. Precisely, it forces each Slot Sharing Group (SSG) to contain only one task. The reason is shown in the following figure. 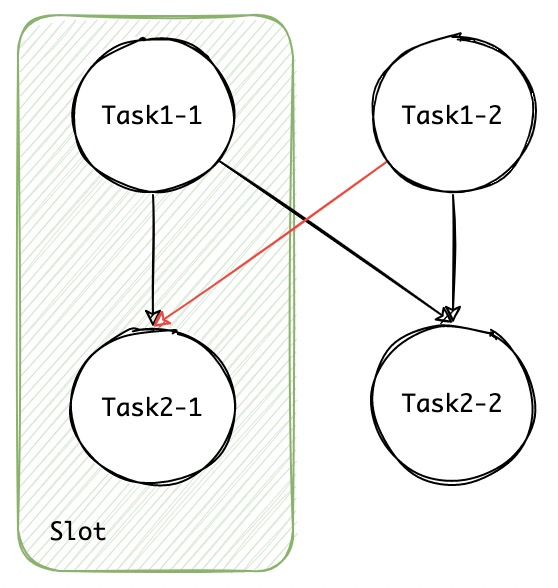 If Task1 and Task2 are in the same SSG, once Task1-1 gets a slot, Task2-1 will also be scheduled for execution. However, if there’s no extra slot for Task1-2 and Task2-2 to execute, Task2-1 may not be able to consume data from Task1-2, thus never finishes. Addressing this issue requires extra careful design changes to the scheduling mechanism, thus is scoped out from this FLIP.

Consequently, users may find jobs with Hybrid Shuffle using more slots (if available) than with Pipelined or Blocking Shuffle, due to slot sharing disabled. To some extent, this is also an advantage that Flink can leverage more available resources to speedup the execution when it’s possible.

The changes will be covered by unit, integration and e2e test cases.