Generally speaking, applications may consist of one or more jobs, and they may want to share the data with others. In Flink, the jobs in the same application are independent and share nothing among themselves. If a Flink application involves several sequential steps, each step (as an independent job) will have to write its intermediate results to an external sink, so that its results can be used by the following step (job) as sources.

Although functionality-wise this works, this programming paradigm has a few shortcomings:

It turns out that interactive programming support is critical to the user experience on Flink in batch processing scenarios. The following code gives an example:

In the above code, because b is not cached, it will be computed from scratch multiple times whenever referred later in the program.

To address the above issues, we propose to add support for interactive programming in Flink Table API.

3. Add a close method to the TableEnvironment

As mentioned in the motivation section. The key idea of the FLIP is to allow the intermediate process results to be cached, so later references to that result do not require duplicate computation. To achieve that, we need to introduce Cached Tables.

The cached tables are tables whose contents are saved by Flink as the user application runs. A cached Table can be created in the following way:

Scope of the cached result

The cached tables are available to the user application using the same TableEnvironment.

The cached intermediate results will consume some resources and need to be released eventually. The cached result will be released in two cases.

When TableEnvironment is closed, the resources consumed by the cached tables will also be released. This usually happens when user application exits.

To let the feature available out of the box, a default file system based cache service will be provided, which utilizes the cluster partition implemented in FLIP-67. This section describes the implementation details of the default table service.

The architecture is illustrated below:

Each cached table consists of two pieces of information:

The metadata of the cached table is stored in the client (e.g. CatalogManager) and the actual contents are stored in the Task Managers as cluster partitions(FLIP-67).

The end to end process is the following: 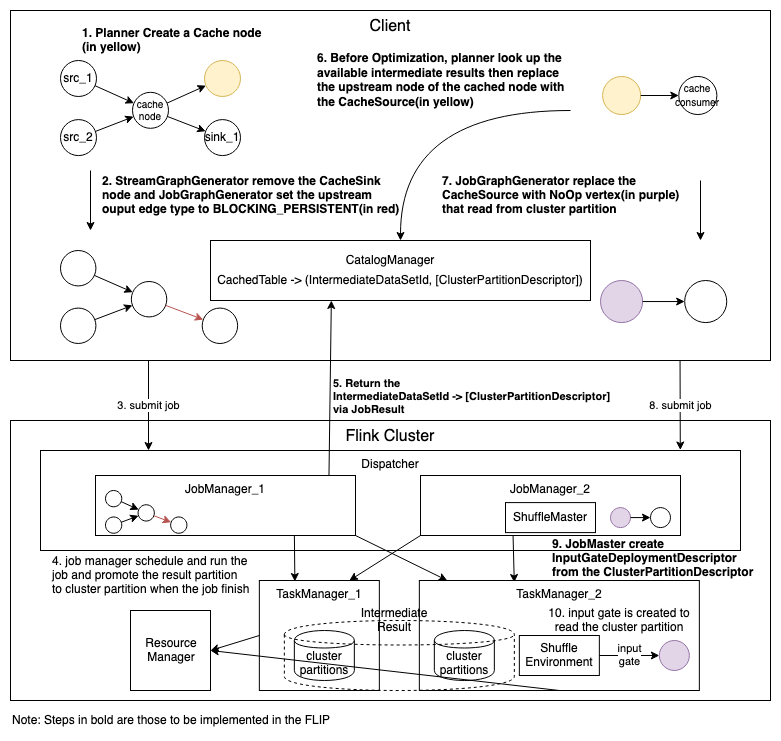 Please refer to FLIP-67 for the implementation detail of steps 2 and 3.

Repartition is needed when the cache consumer requires the input data to be partitioned in a specific way, i.e. hash partition, custom partition. When the StreamingJobGraphGenerator generates the job graph, it introduces a NoOp job vertex as the upstream vertex of the cache consumer and maintains the shipStrategyName of the output job edge. During execution, the task executor will make sure that the data is repartitioned.

If a Task Manager instance fails, Flink will bring it up again. However, all the intermediate results which have a partition on the failed TM will become unavailable.

In this case, the consuming job will throw an exception and the job will fail. As a result, PartitionTracker in ResourceManager will release all the cluster partitions that are impacted(implemented in FLIP-67). The TableEnvironment will fell back and resubmit the original DAG without using the cache. The original DAG will run as an ordinary job that follows the existing recovery strategy. Note that because there is no cache available, the TableEnvironment (planner) will again create a Sink to cache the result that was initially cached, therefore the cache will be recreated after the execution of the original DAG.

The above process is transparent to the users.

In the per-job mode cluster, a cluster will be spun up on every submitted job and tore down when the submitted job finished. All lingering resources (files, etc) are cleared up, including the cluster partition in the TMs. Therefore, the cached table will not work in the Per-Job mode cluster. When a job that read from some cached table is submitted in Per-Job mode, the first submission of the job will fail and the failover mechanism will re-execute the origin DAG.

To explain how the optimizer affects the cache node, let look at a very simple DAG, where one scan node followed by a filter node, as shown below. The optimizer can push the filter to the scan node such that the scan node will produce fewer data to the downstream node. However, such optimization will affect the result of the scan node, which is an undesired behavior if we want to cache the scan node. 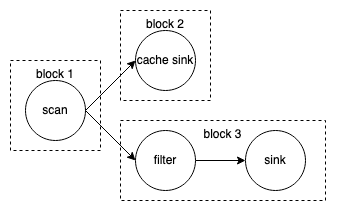 The most intuitive way to use the cache table with SQL is to create a temporary view. We can introduce a new keyword CACHED and combine it with the CREATE TEMPORARY VIEW syntax. For example, the following SQL will register the CachedTable Object in the Catalog. And the later SQL statement can refer to the temporary view in order to use the cache table. Such syntax should align well with the caching in the Table API, as the following SQL has a similar effect of running tEnv.registerTemporaryView("CachedTable", table.cache()) in Table API.

As of now DataStream only supports stream processing. There is some idea of supporting both Stream and Batch (as finite stream) in DataStream. Once we do that, we can add the cache API to DataStream as well.

Theoretically speaking, users can also cache a streaming table. The semantic will be storing the result somewhere (potentially with a TTL). However, caching a streaming table is usually not that useful. For simplicity, we would not support stream table caching in the first implementation. When cache() is invoked on a stream table, it will be treated as a No-Op. This leaves us room to add caching for stream tables in the future without asking users to change their code.

The cached table utilizes the cluster partition implemented in FLIP-67 to store the intermediate result in the TMs. Therefore, it is possible that the TM could run out of space to hold the intermediate result if clients cache too many tables without releasing. When it happens, the job will fail with an exception. For simplicity, we would not implement an automatic mechanism to handle such failure in the first implementation. For now, it is up to the user to decide what to do when the failure happens. In the future, we could introduce some kind of eviction policy to release some cluster partition when the failure happens and re-run the job.

This FLIP proposes a new feature in Flink. It is fully backward compatible.

In order to implement the cache table, the following changes are needed.

The implementation should proceed in the following way, some of which can proceed concurrently:

Unit tests and Integration Tests will be added to test the proposed functionalities.

The semantic of the cache() / invalidateCache() API has gone through extended discussions. The rejected alternative semantics are documented below: