NOTE: User-Defined AggregateFunction, Python DataStream API support and Pandas support will not be covered in this FLIP. Definitely they will also be supported. However, considering that they are big topics, separate design docs and discussions will be better. However, the data structures proposed in this FLIP will be the basis for Pandas support and Python DataStream API support.

We will focus on the most used scenarios and revisit these features in the future.

Executing user-defined functions of languages other than Java can be broken up into the following items: 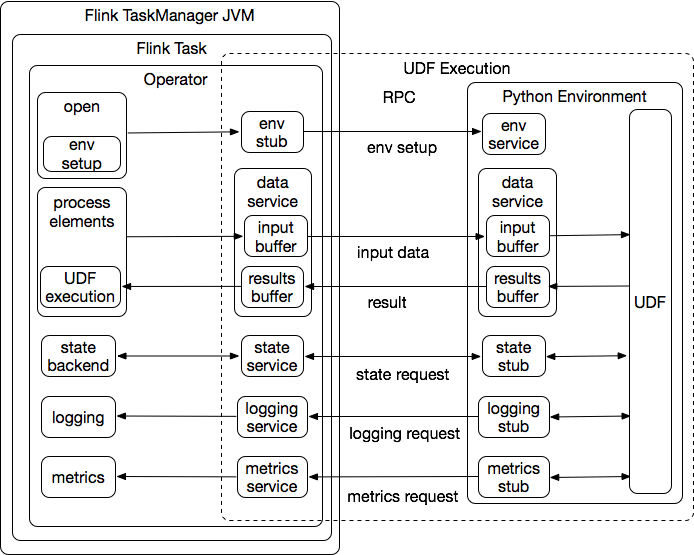 The components involved in the communication between Flink operator and Python execution environment is as follows:

There are three kinds of user-defined functions: scalar function, table function. The interfaces are as follows.

User-defined functions may need to report metrics during execution. The following interfaces will be proposed to support it.

We will add the following decorators to declare the input types, the output types and the accumulator types of user-defined functions:

Besides, decorators can also be used to declare a Python function as UDF or UDTF:

Firstly, we need to allow the Python user-defined functions could be registered. The following interfaces will be added to the Python TableEnvironment:

Underlying, the corresponding Java instance of ScalarFunction, TableFunction will be created and registered into the TableEnvironment. To distinguish the Python user-defined functions from the Java user-defined functions, the method getLanguage will be introduced to Java interface FunctionDefinition: 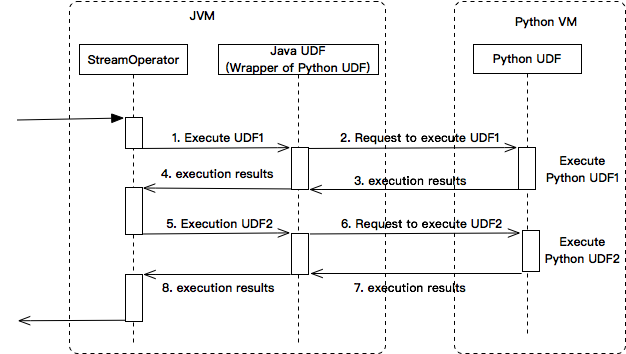 Considering that the terrible performance of this solution, we propose another solution:

It should be noted that the inputs are processed in a pipeline manner, it will not wait for the execution results before processing another input.

Although the cost is bigger compared to solution 1), we tend to choose this solution for performance reasons.

The height can be calculated as follows:

Regarding the following job:

The physical plan will be adjusted as follows:

The join type and join condition of the merged Correlate is the same as the second Correlate.

The table function of the merged Correlate of the above job is as follows:

In the following, we will introduce how to extend the data structures and protocols provided in Beam portability framework to implement PythonUserDefinedFunctionRunner.

The following diagram shows the architecture of the PythonUserDefinedFunctionRunner based on Beam portability framework. 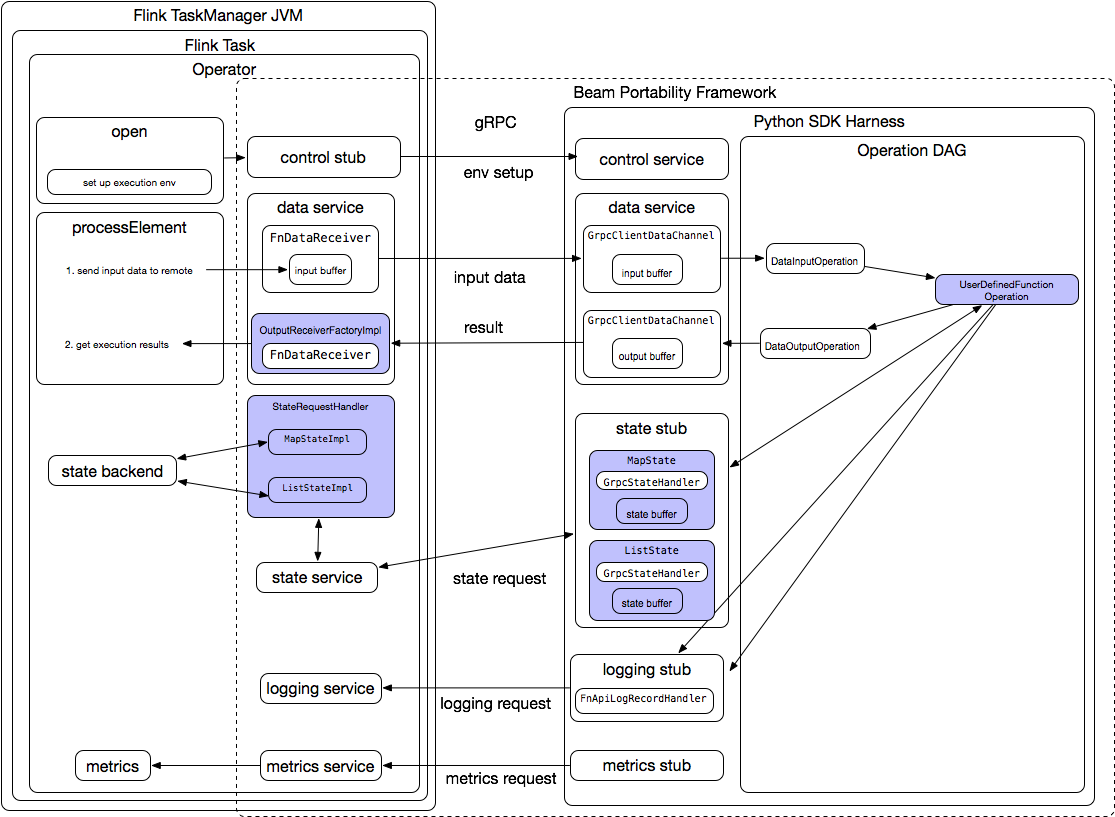 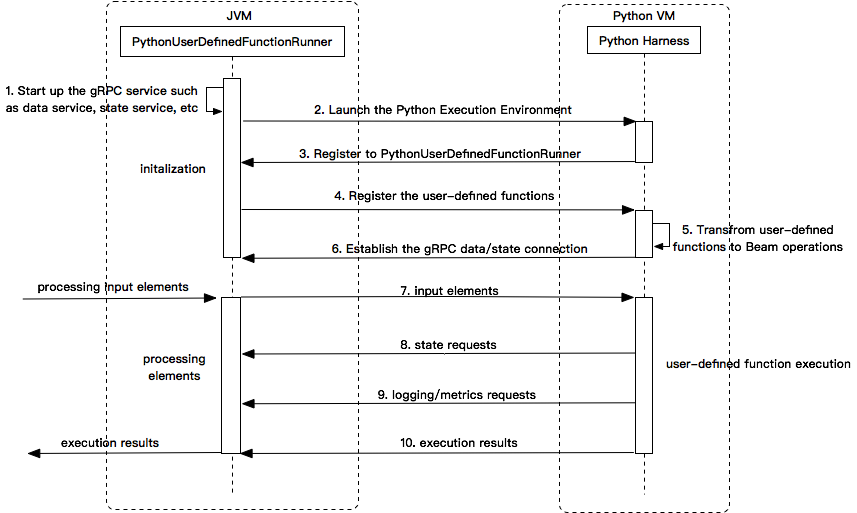 The high-level flow could be summarized as two parts:

PythonUserDefinedFunctionRunner needs to prepare the Python execution environment during the operator initialization phase, such as launching the Python VM, registering the Python user-defined functions to be executed, etc.

Interfaces JobBundleFactory and StageBundleFactory provided in Beam could be used to prepare the user-defined function execution environment. The interfaces are as follows:

After StageBundleFactory.getBundler() is called, the Python execution environment will be launched and the Python user-defined functions will be registered to the it:

After the Python VM is initialized, PythonUserDefinedFunctionRunner is ready to process the inputs.

Regarding data tran,  we can see from the interface StageBundleFactory that:

At Java side, PythonUserDefinedFunctionRunner can make use of these data structures to send and receive data:

At Python side, Beam portability framework provides a basic framework for Python user-defined function execution (Python SDK Harness). The Python framework provides a class BeamTransformFactory which transforms user-defined functions DAG to operation DAG. Each node in the operation DAG represents a processing node. DataInputOperation (which is responsible for fetching data from the remote side) and DataOutputOperation (which is responsible for sending data to the remote side) are responsible for receiving inputs and sending execution results separately.

Regarding UDTF, it may produce zero or multiple results. As we know that, for Correlate node, for each input, the result is a collection of rows of the joined results of the original input row and the UDTF results. For one UDTF result, how could the PythonUserDefinedFunctionRunner know which input row it is corresponding to? There are two solutions:

Solution 1 is preferred for now as no extra header is needed. If the number of table function results for one input is so big that OOM is caused, users should increase the heap memory or optimizing the table function.

Beam divides input elements into bundles and there are two points should be noted:

We need to handle checkpoint and watermark in a proper way to solve the above problems.

We can see from the diagram of the architecture that the states accessed in the Python user-defined functions are managed by the state backend of the Flink operator. The following things should be done to make sure the checkpoint works well:

There are two approaches to handle the watermark:

Approach 1 has better latency and approach 2 has better throughput. The Flink runner in Beam takes approach 2 for better performance and we can just take approach 2 too. We can support approach 1 in the future as an option if we find it necessary and make it configurable.

During user-defined function execution, it may produce a lot of logs for all kinds of purposes. Collecting the logs from the remote execution environment will be benefit for logging management.

Logging service has already been provided in Beam for log aggregation and we could benefit from it with nothing need to do:

We can see from the interface StageBundleFactory that a BundleProgressHandler needs to be provided during the execution environment initialization.

The BundleProgressHandler defines the callback of job execution progress. The data structure ProcessBundleProgressResponse and ProcessBundleResponse contain the metrics information collected in the remote environment.

To support user defined metrics, we need to do the following things:

The job parameters will be serialized together with the user-defined functions and transferred to the Python execution environment during initialization.

As the operator will launch separate Python process for Python user-defined function execution, we should make sure that the resource used by the Python process be accounted by Flink’s Resource Management framework.

Config the resource used by the Python process

Limit the Python process according to the resource configured

In Unix system, Python has provided a library “resource” which can be used to set a hard limit of the memory size for a Python process. We can use it to set the hard limit for the Python worker.

For Python Table API jobs, if an operator contains Python use-defined function, it will be given a resource which is the origin resource + the resource used by the Python process.