Live Long And Process (LLAP) functionality was added in Hive 2.0 (HIVE-7926 and associated tasks). HIVE-9850 links documentation, features, and issues for this enhancement.

Hive has become significantly faster thanks to various features and improvements that were built by the community in recent years, including Tez and Cost-based-optimization. The following were needed to take Hive to the next level:

Also known as Live Long and Process, LLAP provides a hybrid execution model.  It consists of a long-lived daemon which replaces direct interactions with the HDFS DataNode, and a tightly integrated DAG-based framework.
Functionality such as caching, pre-fetching, some query processing and access control are moved into the daemon.  Small/short queries are largely processed by this daemon directly, while any heavy lifting will be performed in standard YARN containers.

Similar to the DataNode, LLAP daemons can be used by other applications as well, especially if a relational view on the data is preferred over file-centric processing. The daemon is also open through optional APIs (e.g., InputFormat) that can be leveraged by other data processing frameworks as a building block.

Last, but not least, fine-grained column-level access control – a key requirement for mainstream adoption of Hive – fits nicely into this model.

The diagram below shows an example execution with LLAP. Tez AM orchestrates overall execution. The initial stage of the query is pushed into LLAP. In the reduce stage, large shuffles are performed in separate containers. Multiple queries and applications can access LLAP concurrently. 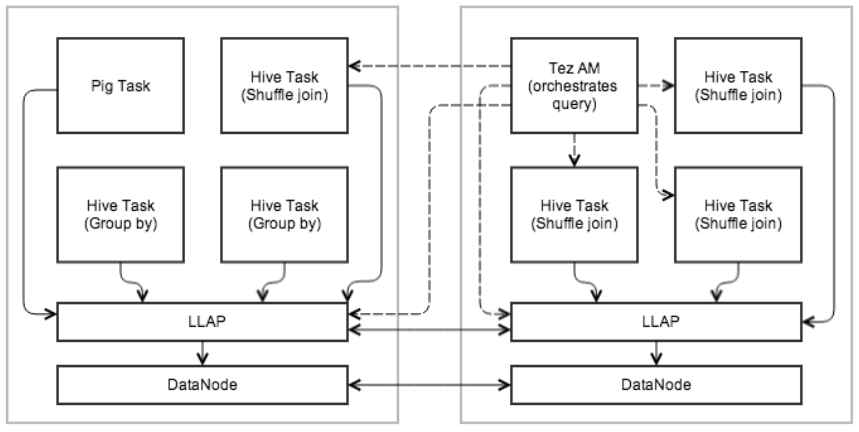 To facilitate caching and JIT optimization, and to eliminate most of the startup costs, a daemon runs on the worker nodes on the cluster. The daemon handles I/O, caching, and query fragment execution.

LLAP works within existing, process-based Hive execution to preserve the scalability and versatility of Hive. It does not replace the existing execution model but rather enhances it.

For partial execution as described above, LLAP nodes execute “query fragments” such as filters, projections, data transformations, partial aggregates, sorting, bucketing, hash joins/semi-joins, etc. Only Hive code and blessed UDFs are accepted in LLAP. No code is localized and executed on the fly. This is done for stability and security reasons.

The daemon off-loads I/O and transformation from compressed format to separate threads. The data is passed on to execution as it becomes ready, so the previous batches can be processed while the next ones are being prepared. The data is passed to execution in a simple RLE-encoded columnar format that is ready for vectorized processing; this is also the caching format, with the intent to minimize copying between I/O, cache, and execution.

The daemon caches metadata for input files, as well as the data. The metadata and index information can be cached even for data that is not currently cached. Metadata is stored in process in Java objects; cached data is stored in the format described in the I/O section, and kept off-heap (see Resource management).

YARN is used to obtain resources for different workloads. Once resources (CPU, memory, etc.) have been obtained from YARN for a specific workload, the execution engine can choose to delegate these resources to LLAP, or to launch Hive executors in separate processes. Resource enforcement via YARN has the advantage of ensuring that nodes do not get overloaded, either by LLAP or by other containers. The daemons themselves is under YARN’s control.

LLAP is aware of transactions. The merging of delta files to produce a certain state of the tables is performed before the data is placed in cache.

Multiple versions are possible and the request specifies which version is to be used. This has the benefit of doing the merge asynchronously and only once for cached data, thus avoiding the hit on the operator pipeline.

LLAP servers are a natural place to enforce access control at a more fine-grained level than “per file”. Since the daemons know which columns and records are processed, policies on these objects can be enforced. This is not intended to replace the current mechanisms, but rather to enhance and open them up to other applications as well.

LLAP Monitor Daemon runs on YARN container, similar to LLAP Daemon, and listens on the same port.
The LLAP Metrics Collection Server collects JMX metrics from all LLAP Daemons periodically.
The list of LLAP Daemons are extracted from the Zookeeper server which launched in the cluster.

LLAP can be deployed via Slider, which bypasses node installation and related complexities (HIVE-9883).