TCP Discovery SPI under the hood

Node - individual instance of Ignite, either a server or a client.

Client node - a thick client used to connect to an Ignite cluster. It can't store any data and acts as a gateway to the cluster.

Node order - internal property of a node used to imply a total order over the nodes in a cluster.

Topology - arrangement of nodes connected via a communication network.

The main goal of the discovery mechanism is to create a topology of Ignite nodes and build and maintain a consistent in-memory view of it on every node. For example, this view may contain the number of nodes in the cluster and their orders.

When describing cluster topology, we are talking about a logical arrangement that only exists on the "discovery" level. For example, when querying data residing in caches, a cluster might use a different topology than described here.

TcpDiscoverySpi organizes all server nodes of a cluster into a ring-shaped structure where each node can only send discovery messages to a single node (called a "neighbor"). Client nodes stay outside of the ring and are always connected to a single server. This logic is contained inside ServerImpl and ClientImpl classes for server and client nodes respectively. 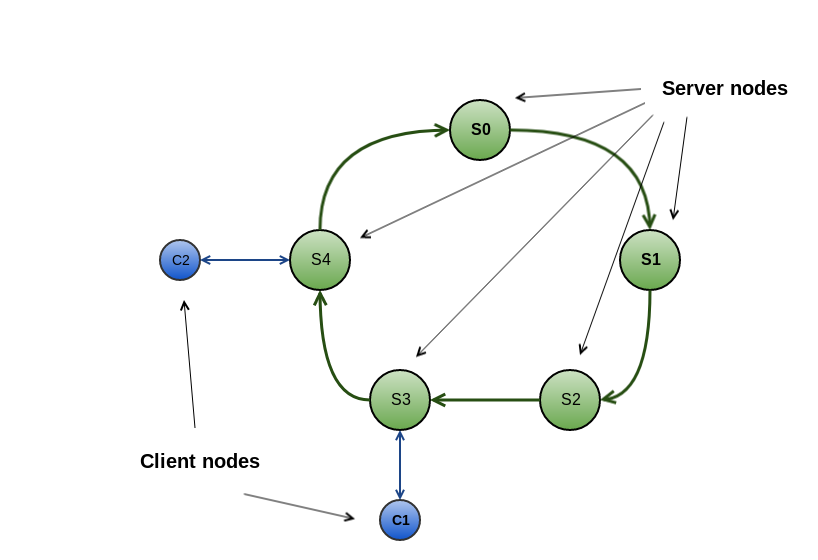 When a new node starts, it tries to find an existing cluster by probing all addresses provided by the TcpDiscoveryIpFinder. If all addresses are unavailable, the node considers itself as the only node, forms a cluster from itself and becomes the coordinator. Otherwise, it starts the join process.

A node begins the join process by calling ServerImpl#joinTopology (for server nodes) or ClientImpl#joinTopology (for client nodes), which in turn calls TcpDiscoverySpi#collectExchangeData to collect all necessary discovery data (e.g. cache configurations from GridCacheProcessor, see different GridComponent#collectJoiningNodeData implementations). This data gets packed into the join request and sent to the coordinator.

When the coordinator receives the request it validates the message and generates the TcpDiscoveryNodeAddedMessage, if a validation was successful (see ServerImpl.RingMessageWorker#processJoinRequestMessage). This message is then sent across the ring.

When handling the TcpDiscoveryNodeAddedMessage, every node in the cluster applies joining node discovery data to components, collects its local discovery data, and adds it to the message (see ServerImpl.RingMessageWorker#processNodeAddedMessage for details). The message is then propagated further across the ring by calling ServerImpl.RingMessageWorker#sendMessageAcrossRing.

TcpDiscoveryNodeAddedMessage is delivered to the joining node as well, it receives the message at the very end after all other nodes have already processed it.

TcpDiscoveryNodeAddFinishedMessage finishes the process of node join. When receiving this message, each node fires the NODE_JOINED event to notify the discovery manager about the new joined node.

The joining node will send an additional join request if it doesn't receive TcpDiscoveryNodeAddFinishedMessage on time. This time is defined by TcpDiscoverySpi#networkTimeout and has a default value of 5 seconds (TcpDiscoverySpi#DFLT_NETWORK_TIMEOUT).

Detecting failed nodes is the responsibility of each server node in a cluster. However, detecting failed servers and clients works slightly differently.

As servers are organized into a ring each node can easily detect failure of its next neighbor node if sending of a discovery message fails. 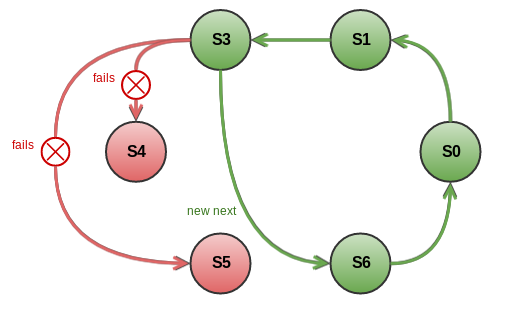 However, the process of removing a failed node from the ring is not that simple and has to be managed by the coordinator. It contains two steps:

During the first step, the server that detected that its neighbor has failed adds the broken node's address to a special in-memory structure called failedNodes (see TcpDiscoveryAbstractMessage#failedNodes). This structure is then used to filter out the failed nodes from the list of all nodes in the ring until the second step is complete.

After that, the server tries to establish a connection to the next node in the ring. If the connection is established, this node becomes the new neighbor, otherwise the process gets repeated until a working node is found.